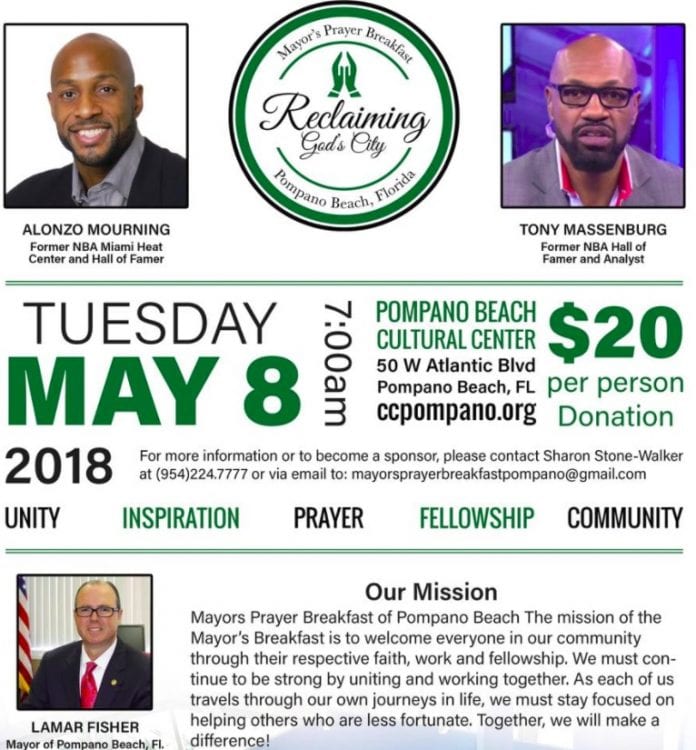 The Pompano Beach Cultural Center is honored to host the Mayor’s Prayer Breakfast on Tuesday, May 8, 2018 at 7am.The theme for this year’s gathering of community leaders and residents is “Reclaiming God’s City.”

The program will feature former NBA Miami Heat Center and Hall of Famer Alonzo Mourning, along with former NBA player and analyst Tony Massenburg, as the event’s keynote speakers.

Mayor Lamar Fisher will preside over the prayer breakfast which will include musical performances by local Pompano Beach church choirs, special appearance by several NBA and NFL players and a flag presentation by students from Marjory Stoneman Douglas High School.

“This will be a dynamic prayer breakfast that will be filled with inspiration,” said Mayor Fisher. “You won’t want to miss it!”

The mission of the Mayor’s Prayer Breakfast is to welcome everyone in the community for an inspirational gathering; uniting the community for the common good of helping those who are less fortunate.  Together, residents faithfully pray for the continued growth and success of Pompano Beach, its schools and businesses and for the protection of the City’s residents, first responders and leaders.

“I am honored to be part of the Mayor’s Prayer Breakfast and I look forward to sharing with the residents of Pompano Beach the importance of my faith and the role it has played in my life,” said Mourning, who reaffirmed his commitment to Christ during his battle with kidney disease.

Mourning, who rose from the foster care system after leaving his tumultuous family life, went on to be one of the greatest NBA players of all time. His dramatic success story and his widely covered recovery from a deadly disease has made him one of the most inspiring speakers in the country.

Joining Mourning will be fellow former NBA star, Tony Massenburg, who also expressed excitement about speaking at this event. “I look forward to sharing my message of how with hard work and resiliency, you will accomplish your dreams and heart’s desires,” he said. “But most importantly, this prayer breakfast is an opportunity to acknowledge that with God, all things are possible.