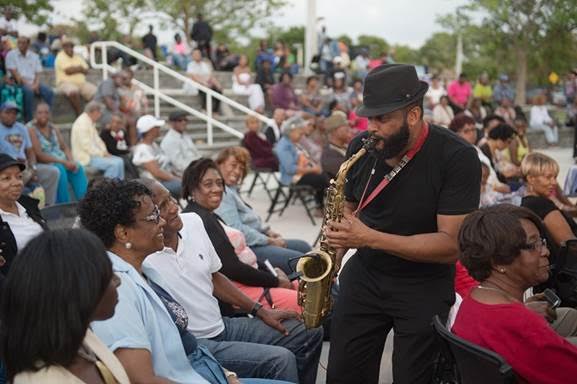 More than 600 residents packed into the Betty T. Ferguson Amphitheater for Music in the Park on May 4 in Miami Gardens. The audience clapped their hands and tapped their feet as Mustafa on Sax featuring Groove Box and famed steelpan jazz musician Othello Molineaux captivated the crowd during the free semi-annual concert sponsored by Miami-Dade County Commissioner Barbara J. Jordan, the Sunshine Jazz Organization, Miami Gardens Councilwoman Felicia Robinson, and the Miami-Dade Cultural Affairs Department.

“This was one of the best concerts yet,” Commissioner Jordan said. “I’m thrilled that we had such a great turnout.”

Concertgoers grooved to the smooth and soulful tunes of Miami Gardens’ own Melton Mustafa Jr. who serenaded members of the crowd with sultry love songs and jazz and soul classics including a song once performed by his late father, Melton Mustafa Sr. Mustafa Jr. dedicated a portion of the show to his mother, Zakiyyah, who was in the audience, and presented her with roses in her honor.

For the second part of the show, jazz steelpan virtuoso Othello Molineaux impressed the crowd with a dynamic island-infused jazz performance. Molineaux, a South Florida resident, is credited with introducing steel drum jazz to a wider audience. He is considered the first steel drum player to be featured on a jazz recording.

The next Music in the Park concert is scheduled for December 7.