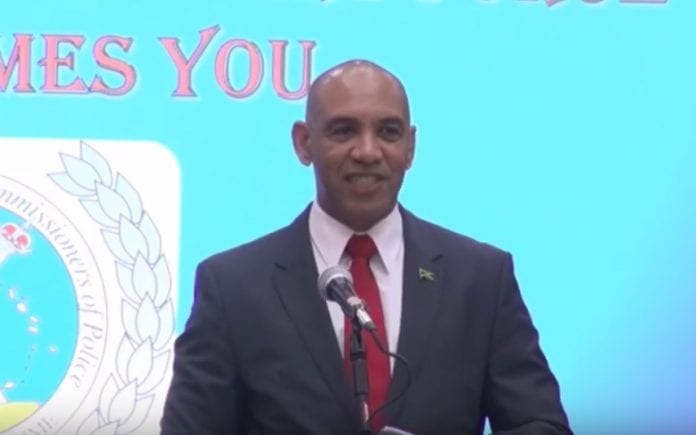 Over the weekend, it was announced that Jamaica’s Police Commissioner Major General Antony Anderson has tested positive for COVID-19.

The police information arm, the Corporate Communications Unit (CCU), says he is now in isolation at home after presenting flu-like symptoms.

According to the CCU the commissioner’s immediate support staff are all being tested and have been placed under quarantine and sections of his office have also been closed for sanitisation.

Anderson has also called on all members of the force, particularly those on the frontline to take all necessary precautions as they carry out their daily functions.

He says members should strictly observe the established COVID-19 protocols and immediately seek medical support once they exhibit any flu-like symptoms.

The news comes after the government announced a 7 PM to 5 AM curfew for Kingston and St. Andrew, St. Catherine and Clarendon following a spike in cases in these parishes over the last two weeks.

Holness said that the curfew was necessary to restrict the movement of persons, since the virus cannot move on its own and among the measures would be restrictions regarding churches being prohibited from holding funerals.

“They will of course be able to hold their regular worships. Burials however will continue with strict observations and enforcement of the 15 person rule and the 15 includes the funeral officials and the persons preparing the grave sites”.

He said the government would also be reviewing the access to beaches and water parks.

Holness said that the new measures would also affect the campaign for the September 3 general election and that discussions had taken place with the main opposition People’s National Party (PNP) in that regard.

“It just takes on errant person who is not following the protocols to come in the midst of a campaign event even if it is just 20 persons and infect the entire gathering,” Holness told reporters, adding that motorcades in the convention sense will be prohibited.

“What we have decided to allow, but this will be under observation, if it does not work, we will shut that down as well, we will allow drive through meaning that the political party should present a route to the police…and they can drive through but not stop and greet”.

Holness said as a result “there should be no gathering at any point” and persons would not be allowed to alight from the vehicles and mix with the crowd.

“It is just a very controlled drive-through. We will ask the police to observe and report and if the activity, which is one that suggests it is not being followed then we will have to ban all kinds of such campaign activities,” he said, adding that the authorities will allow five persons to undertake door to door campaigning.

The coronavirus has also affected the operations of several entities in these parishes, including the Jamaica Defense Force, Digicel, the National Commercial Bank, Kingston’s tax offices, the Kingston health department and Jamaica Customs, which have all had to temporarily close due to one or more positive cases among their staff.

The government says that the island is now beginning to show signs of community spread as the COVID-19 cases are steadily on the rise and also becoming more random.

The curfew in the four parishes is set to expire on September 2, the day before the island’s general elections. As of Sunday, Jamaica had over 1,500 COVID-19 cases and 16 deaths. Some 31 staff members at the Kingston Public Hospital were also placed in quarantine after eight positive cases were detected among the staff.