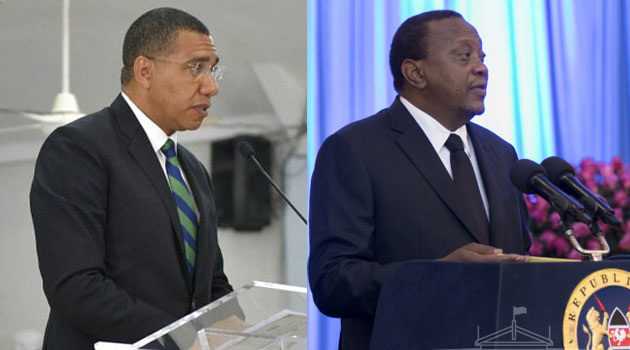 KINGSTON, Jamaica, CMC – The Government of Jamaica has launched the start of one year of local activities in recognition of the United Nations (UN) Declaration of the International Decade for People of African Descent, 2015-2024.

This got underway earlier this week and the country celebrated 57 years of political independence.

At the Independence Grand Gala, held at the National Stadium, Prime Minister Andrew Holness, and President of the Republic of Kenya, Uhuru Kenyatta, announced their commitment to work together to activate initiatives which form part of the declaration.

According to Minister of Culture, Olivia Grange, the year-long celebrations will highlight and commemorate the important contributions that people of African descent have made to the Jamaican society.

“We will have a travelling exhibition, which is curated by the National Council on Reparations, and it will speak to the atrocities. We will display a number of instruments that were used on our enslaved ancestors and it will speak to a public education programme that will educate the country on what reparations mean and what we are striving for.”

“In addition to that, we will have some celebratory activities, as well as some legacy projects,” she noted.

Proclaiming this International Decade with the UN, the international community is recognising that people of African descent represent a distinct group whose human rights must be promoted and protected.

Approximately 200 million people identify as being of African descent live in the Americas.

The UN General Assembly proclaimed 2015-2024 as the International Decade for People of African Descent (Resolution 68/237), citing the need to strengthen national, regional and international cooperation in relation to the full enjoyment of economic, social, cultural, civil and political rights by people of African descent, and their full and equal participation in all aspects of society.

As proclaimed by the General Assembly, the theme for the International Decade is: ‘People of African descent: recognition, justice and development’.

The objectives of the International Decade are to: promote respect, protection and fulfilment of all human rights and fundamental freedoms by people of African Descent, as recognised in the Universal Declaration of Human Rights; promote a greater knowledge of and respect for the diverse heritage, culture and contribution of people of African descent to the development of societies; and to adopt and strengthen national, regional and international legal frameworks according to the Durban Declaration and Programme of Action and the International Convention on the Elimination of All Forms of Racial Discrimination and to ensure their full and effective implementation.