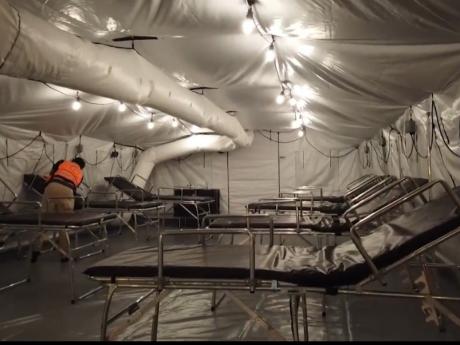 To assist in its COVID-19 response, the United States government has gifted Jamaica a 70-bed mobile field hospital.

The facility, which is worth US$753,000, was transported to Kingston on September 19 by the US Air Force. It will be set up in the St Andrew parish.

The field hospital was purchased as part of US Southern Command’s (SOUTHCOM) ongoing assistance to the Caribbean, Central America and South America.

In a statement, SOUTHCOM said that the hospital can house up to 70 patient beds and is equipped to operate autonomously and includes a high-efficiency particulate air (HEPA) and ultraviolet-light air-scrubber system, two diesel generators, and eight air conditioning units. Medical teams using the hospital can configure it to isolate patients and conduct surgical operations, if needed.

A team of civilian trainers will also instruct Jamaican medical and support teams chosen to run the mobile hospital on its assembly, among other things.

In addition to the field hospital, SOUTHCOM has also funded the donation of hand-held thermometers and patient beds, at a cost of approximately $86,000.

The field hospital will be set up from Sept. 21-23 with the official hand over on September 24.

Jamaica’s health minister Dr. Christopher Tufton had announced back in April that the island would be getting a field hospital, long before there was a COVID-19 spike.

The setup of the hospital is timely, as COVID-19 deaths on the island have doubled in the past two weeks, to a total of 60.

Overall, the U.S. government has provided Jamaica with $2 million in funding to support its response to COVID-19.

SOUTHCOM said the field hospital was donated “on behalf of the American people.”