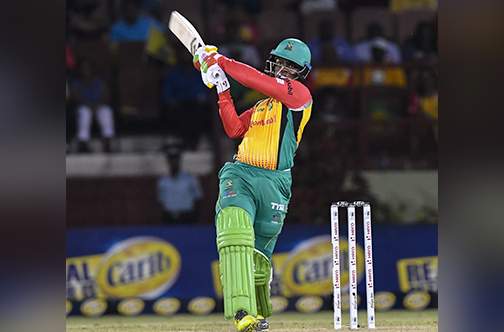 TAROUBA, Trinidad – Shimron Hetmyer stroked his second successive half-century but Guyana Amazon Warriors were less than clinical as they knocked over St Kitts and Nevis Patriots by three wickets in the Caribbean Premier League on Wednesday night.

Cruising on 96 for two at the end of the 13th over in pursuit of a meagre 128, Amazon Warriors suddenly lost a clatter of wickets – five for 28 runs in the space of 21 deliveries – before stumbling over the line still with three full overs to spare at the Brian Lara Stadium.

Captain Rayad Emrit (3-31) created the drama, removing Sherfane Rutherford (10) and Keemo Paul with the very next ball without scoring at the end of the 16th over.

And when Hetmyer holed out on the ropes two balls later in the next over for a top score of 71, Amazon Warriors had lost three wickets for four runs off just four deliveries.

However, left-arm pacer Dominic Drakes provided an anticlimactic finish, sending down a wide followed by a no-ball, before Romario Shepherd drilled a half-volley down the ground for four to end the contest.

No such drama was anticipated when Patriots meekly crawled to an inadequate 127 for eight off their 20 overs with opener Evin Lewis top-scoring with 30 off 18 balls and Australian Ben Dunk getting 29 from 24 deliveries.

Man-of-the-Match Paul hurt the innings with a superb spell of four for 19 from four overs of fast bowling while South African leg-spinner Imran Tahir claimed two for 18 from his allotment of four overs.

Sent in, Patriots recovered from the cheap loss of Chris Lynn for 16 to reach 53 without further loss before things fell apart spectacularly.

Left-hander Lewis had already belted four fours and a couple of sixes – including two fours in the previous two deliveries – when he advanced to off-spinner Chris Green, missed his stroke and was smartly stumped by Pooran.

Unknown Aussie Nick Kelly fell for five in the next over with three runs added and Denesh Ramdin (9) put on 23 with Dunk for the fourth wicket before glancing a leg-side catch off Paul in the 11th over.

Hopes of a decent total rested on Dunk but he struggled with a single boundary and eventually perished when Paul’s accurate throw from the deep beat his dive at the keeper’s end, as the batman attempted a second run.

In reply, Amazon Warriors lost Brandon King (12) cheaply for the second game on the trot but Hetmyer and Chandrapaul Hemraj (19) added 47 for the second wicket to stabilise the innings.

Hetmyer again looked in fine touch, hitting the ball cleanly to count eight fours and three sixes in a gallant 44-ball innings while Hemraj notched a four and a six off 19 balls.

When Hemraj was run out in the eighth over by Drakes’ direct hit from the deep, Hetmyer and New Zealander Ross Taylor (9) put on 37 for the third wicket before the rot set in.

Hetmyer turned his back on a sharp single at the end of the 13th over and left Taylor stranded mid-pitch and off the first ball of the next over, Pooran wafted at a wide ball from Emrit and nicked a catch behind to depart for a first-ball ‘duck’.

With his side stumbling on 96 for four, Hetmyer continued to carry the innings, having earlier reached his fifty with a massive six over long on off leg-spinner Ish Sodhi.

He lifted left-arm speedster Sheldon Cottrell for his second six over square leg in the 15th over and seemed poised to take Amazon Warriors home when he was taken just inches inside the ropes at long on by Dunk off Drakes.