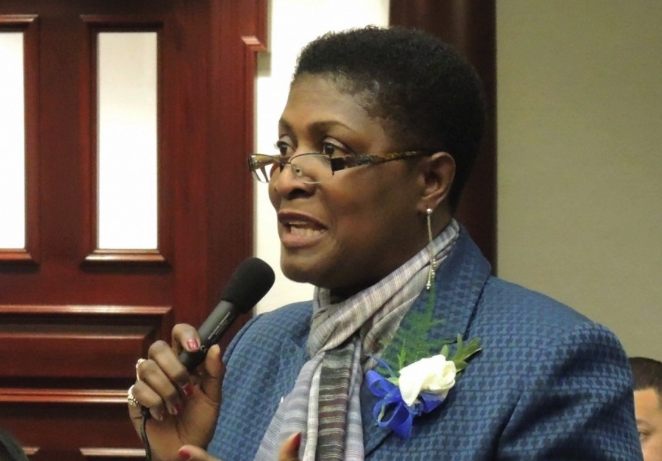 Topping off her final year in office, Caribbean-American Florida State Representative Hazelle Rogers is being awarded the Legislative Appreciative Award for 2016 by the Florida League of Cities.

The award, says the League in a public statement, is in recognition of Rogers’ continued dedication during her tenure to empower and support regional leadership and governance among the South Florida cities in her District 95, which includes Lauderhill, Lauderdale Lakes and North Lauderdale.

“[Rogers] has shown strong support of municipal home rule on several key issues considered by the Legislature this year,” said the League in a statement. “We sincerely appreciate how closely you worked with the League’s advocacy team to ensure municipal interests are maintained.”

Rogers is among 15 legislators receiving the League’s Appreciation Award. Other awardees include Rep. Bobby DuBose of Fort Lauderdale, Rep. George R. Moraitis of Fort Lauderdale, and Rep. Sharon Pritchett of Miramar. The date for the presentation of the award is to be announced shortly. The Florida League of Cities, a coalition of Florida’s municipal governments, seeks to promote and secure self-governance for Florida’s cities and municipalities. Growing from a small number of cities and towns, the Leagues membership currently represents more than 400 cities, towns and villages in Florida.

The award comes as Rep. Rogers ends her tenure in November when she terms out. Rogers served for 8 years in the State House of Representatives, since she was elected in 2008. She first served as a Democratic Deputy Whip for 2010 to 2012, and again from 2012 to 2016.

The soon to be former House Representative now plans to return to local government in her home city of Lauderdale Lakes, where she first started her political career in 1996 when she was elected as city commissioner, where she became the first person from the English-speaking Caribbean American community to be elected to office in the southeastern U.S. She is currently running for Mayor of Lauderdale Lakes, as the term expires for current Mayor, Barrington Russell.