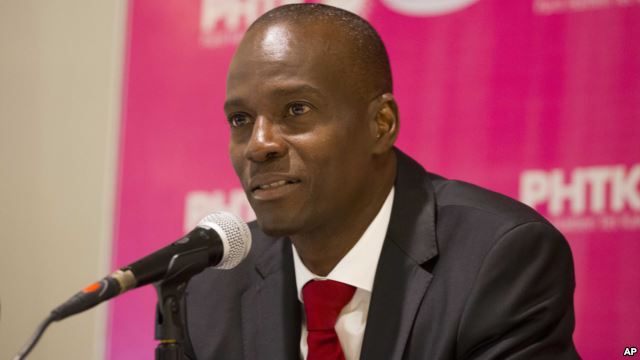 Controversial presidential frontrunner from the preliminary elections results, Jovenel Moise, stopped by Miami on his U.S. tour courting members of the Diaspora, holding a conference this past weekend at the Little Haiti Cultural Center.

The visit is geared towards gauging the Diaspora’s support for his presidency, particularly as media reports circulating about the continued claims of election fraud and violent clashes among party supporters. Though still far away from the scheduled Dec. 27 presidential run-offs, the Michel Martelly-backed Moise presented himself at the de facto president-elect, assuring the local crowd of the election’s legitimacy. Moise told the crowd that he expected to confidently win the run-offs thanks to his vision and the strength of his campaign, dismissing a recent Brazilian exit poll placing Moise in fourth place, and also claims that the majority of Haitian surveyed believed there was fraud in the elections

“If there will be a second round, I am prepared to campaign to sell the same vision, the same program, the same project, which is to bring the soil, the rivers, the sun together to [develop] the county,” says Moise, citing his plan’s focus on boosting the nation’s agricultural sector.

Moise met a mild Miami crowd for his speech, far from the reception he received in New York, where he was confronted with protesters (often supporters from other political parties) at every turn, citing concerns of rampant corruption manipulating the election results in his favor.

However, local supporters from former President Jean-Bertrand Aristide’s Fanmi Lavalas party did attempt to launch a protest during Moise’s town hall meeting, outside the center. Presidential Candidate for Lavalas, Dr. Maryse Narcisse, is one of only two candidates who has legally challenged the results. Narcisse, who through her suit was given access to documentations to verify the results, claims that there were huge discrepancies, from votes outnumbering voters as polling stations, to missing voters’ lists. The local protestors for Narcisse’s cause were told they could not demonstrate without permits. Singer and Lavalas-supporting activist Farah Juste, was briefly arrested for trying to continue the protest, though she was quickly let go afterwards.