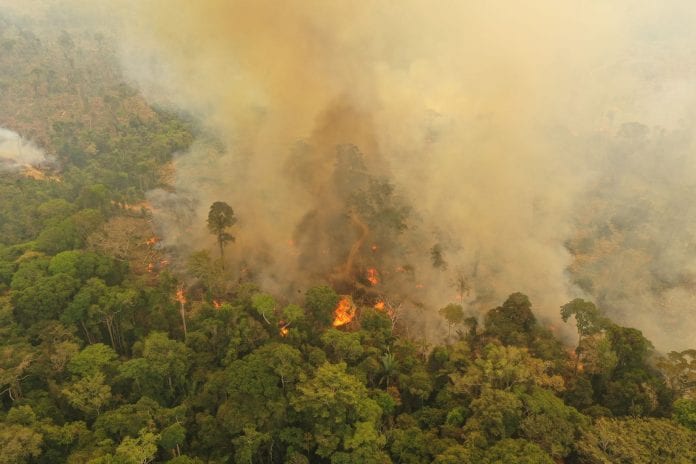 GEORGETOWN, Guyana, CMC -Natural Resources Minister, Raphael Trotman, has sought to assure Guyanese that the ongoing wildfires in the Amazon Rainforest, though troubling, will have no direct impact on the country.

“As a government, of course, we are concerned. The Forestry Commission will be monitoring our own forest to ensure we don’t have any similar occurrences. We are in the throes of an extended wet season so that may have helped us here in Guyana,” he added.

With support from Norway, Guyana has been able to access satellite coverage of its rainforest and Trotman said this monitoring will make it possible for officials to spot anything that could cause concern.

Trotman said while forest fires occur naturally from time to time, the scale of what has been happening in Brazil leaves a trail of concern.

He said any government, including those within the Amazonian region, should be very concerned since whatever conditions led to those fires could happen anywhere.

“At this time, we don’t see any direct impact. At present, with what we are seeing, we are somewhat alarmed and like everyone else, we empathise with the people there and will be giving all the support we can.”

“We all should be concerned, we all should extend our support to the government of Brazil, to ensure that those fires are brought under control,” he added.

Earlier this month, Brazil declared a state of emergency over the rising number of fires in the region. So far, this year, more than 80,000 fires in the country have been detected by Brazil’s space research centre, INPE.

But at the G7 Summit in France, the world leaders pledged to provide logistical and financial support to help fight fires in the Amazon rainforest.

The leaders of Canada, France, Germany, Italy, Japan, the United Kingdom and the United States also agreed on a US$20 million aid package to fight the fires.

Forest fires are common in the Amazon during the dry season, which runs from July to October. These can be caused by naturally occurring events, such as by lightning strikes, but also by farmers and loggers clearing land for crops or grazing.

Brazilian President Jair Bolsonaro, whose pro-development policies have been blamed for the increased illegal clearing and burning of the forest, has authorized the deployment of troops to help extinguish the fires.

The Amazon stretches for more than two million square miles, with about 60 per cent of it located in Brazil. The vast rainforest is believed to produce 20 per cent of the world’s oxygen and represents a major factor in the fight against climate change.