Days into Guyana’s one-month gun amnesty, officials report an estimated 1,000 rounds of ammunition have been turned in to authorities. Minister of Public Security, Khemraj Ramjattan, says the number is a positive start.

“I am pleased that the first day was wonderful. To get a 1,000 rounds of ammunition is worth the whole month, quite frankly, and we must be proud of the fact that it is working,” he said.

The gun amnesty began on September 1 and will continue for the entire month, giving residents the opportunity to turn in illegal weapons and ammunition without fear of facing prosecution.

Ramjattan has urged those still with illegal arms to turn them in, as he warns that offenders will not get off this easy once October rolls around.

“I am promising that if you don’t bring them in, in this month, and we catch you, we are going to ensure that you don’t get bail,” he warned, adding that police were getting tip-offs about people who had illegal weapons. 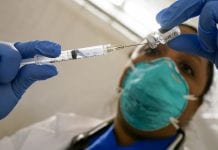