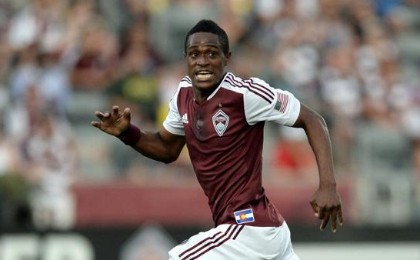 Jamaican Brian Brown netted a brace while fellow countryman Deshorn Brown scored his third of the fledgling season, as their respective teams picked up victories in the United Soccer League last weekend.

At the Greater Nevada Field in Reno, homeside Reno 1868 FC came from behind to beat Austin Bold FC 2-1, courtesy of a second half strikes from Brian Brown.

Veteran Brazilian striker Kleber put the visitors ahead in the 14th minute, a lead which held at half-time. However, Brian Brown pulled Reno level with virtually the first play on the resumption when he got on to the end of Raul Mendiola’s through ball and produced a clinical finish from the right-side of the 18-yard box.

Minutes later, Austin missed the chance to retake the lead when when Calum Mallace hit the crossbar with the keeper beaten but Brown made them pay dearly, finishing off Brent Richards’s cross from the right with stooping head in the 78th minute.

Brown was on target in the 13th minute with a rasping right-footed volley from the top of the 18-yard box, handing the hosts a 1-0 lead at the break.

Javan Torre equalised in the 58th minute with powerful glancing header from a corner but Gordon secured the points for OKC in the 78th minute when he ghosted into the box to finish from close range.

At the Casino Arizona Field, Jamaicans Jason Johnson and Kevaughn Frater also scored, albeit for opposing sides, in a tantalizing 3-3 draw between Phoenix Rising FC and New Mexico United.

Frater netted in the 30th minute for New Mexico to restore their lead after Solomon Asante’s strike a minute earlier had cancelled out Santi Moar’s 16th minute opener, leaving the visitors ahead at half-time.

Asante equalised for the second time before Moar then scored again as New Mexico remained ahead in the 55. However, Johnson snatched a share of the points for the hosts when he nodded in Jamaican Junior Flemmings deft cross in the 71st minute.