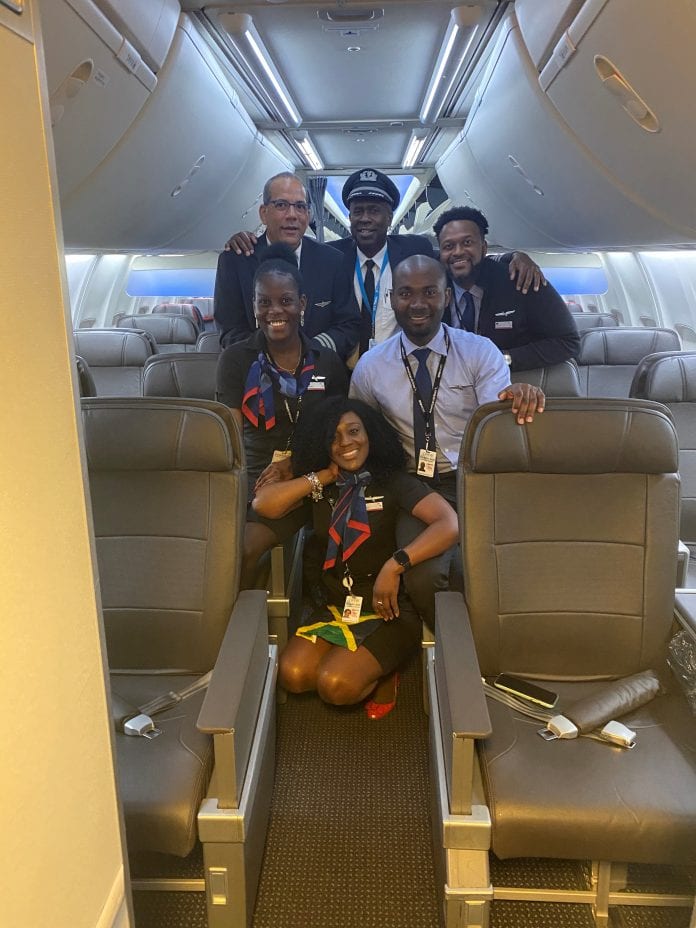 KINGSTON, Jamaica – On Sunday, February 23, American Airlines made history on a flight from Kingston to Miami, with an all-Jamaican crew.

“American Airlines has a long history in Jamaica, with 43 years operating in the country, and this is the first time that we’ve ever had an all-Jamaican crew operating one of our flights,” said Maxine Meijerink, General Manager for Kingston.

“Our team is so proud and I know that our Jamaican customers were also thrilled to be part of this historic journey. American is a company that values diversity and inclusion and this crew exemplifies that commitment.”

Captain Robert McPherson, from Kingston, has been an American Airlines Pilot for more than 20 years. “After three years flying together, First Officer Shaun Nelson and I are now going to fly different aircraft, so this was our last flight together. We couldn’t believe that on this particular flight we had an all-Jamaican crew.”

“Before the flight, we all had ackee and saltfish for breakfast, the perfect way to start this special day,” added McPherson.

Flight Attendant Stanley Franklin, from the parish of Portland, remembers the excitement around the flight. “Being a part of the all-Jamaican crew was exciting, to say the least. We were shocked and excited when all four cabin crew were all-Jamaican but when we found out the cockpit crew both are Jamaican as well, we realized it was an unusual and special occasion.”

Passengers also took part in the fun. “The passengers were also excited…we were all able to speak to them in Patois. It made for a very upbeat, fun flight and you could feel the pride and excitement of the passengers,” said Franklin.

First Officer Shaun Nelson, from Montego Bay, added: “Jamaicans are a proud set of people and when passengers hear the Jamaican accent coming from the cockpit it makes them feel good. You get a lot of ‘Respect Mon’ and ‘Big Up’ when we greet and say goodbye to those passengers.”

After a two hour and six-minute flight, AA2370 landed in Miami at 8:50 a.m. Flight Attendant Linneth Duhaney made her arrival announcement: “This all-Jamaican crew would like to welcome you to Miami.”