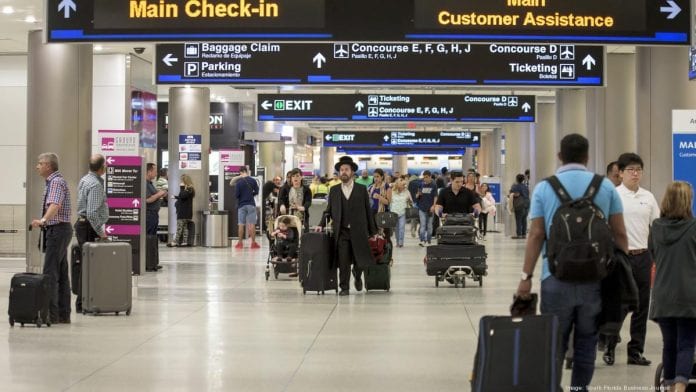 Florida has earned the unfortunate reputation as the US’ epicenter of COVID-19. For several successive days Florida has broken records for infections, reaching another record of 5511 new infections in a 24-hour period on Wednesday.

In an ironic twist, the spike of infections in Florida, and South Florida in particular, on Wednesday New York Governor Andrew Cuomo announced a 14-day quarantine for Floridians traveling to New York, New Jersey and Connecticut.

Last March when the COVID-19 infection map was reversed with New York being the national epicenter for infections, Florida Governor Ron DeSantis required travelers from the New York-Tri State region to Florida to meet certain conditions, including airline passengers filling out forms with information on their health conditions on arrival in Florida..

Monday’s announcement by Cuomo also relates to other states experiencing high COVID-19 rates, including Alabama, Arkansas, Arizona, North Carolina, South Carolina, Texas, Utah and Washington.  The Tri-state basis for the 14-day quarantine, according to Governor Cuomo is applicable to states that have 10 people per 100,000 citizens who have tested positive on a consecutive seven-day basis.

The plan was unveiled in an announcement by Cuomo from his New York City office, with Gov. Ned Lamont of Connecticut and Gov. Phillip Murphy joining online from their state capitals.

For over a week, Cuomo has been hinting of imposing quarantine on travelers to New York from Florida, including New York residents returning home from business, personal and vacation trips. Cuomo and the neighboring governors have justified the new quarantine measures as precautionary to protect the region from reverting to the crisis when these states, collectively, were the epicenter for the virus. Stringent mitigation measures taken by Cuomo and the other governors have significantly flattened the COVID-19 infection curve in these states, resulting in most of the mitigation measures being lifted.

Despite having signaled the possibility of imposing quarantine measures on travelers from Florida, visitors to Florida from the Tri-state region are surprised at Cuomo’s announcement.

Tracee Locke has been in North Miami visiting her brother and his family since June 2, scheduled to return to New York City on Sunday, June 27. “This isn’t good. Because of the lockdown of businesses in New York, I have been unemployed since early April. I took the opportunity to come visit relatives in Miami, but I planned to return on Sunday, having been called to resume my job. Now I’ll be unable to report to work as I have to quarantine for another two weeks.”

Travel between the Caribbean communities in Florida and the New York Tri-State area is usually very active, as the communities are connected by family members, and friends who travel to and from each other for a variety of personal and businesses reasons.

Another Tri-state visitor to South Florida, Donald Snaith from Trenton, New Jersey, says he “fully understands” the quarantine measures being imposed in the Tri-state region. “It was devastatingly bad when the virus was raging through the New York and Jersey region. I know people who died, including care givers. No way, can risks be taken to create a possible of resurgence of the virus in New York, Jersey or Connecticut.”

But it’s not only the Tr-state region that’s exercising caution in having visitors from Florida. Officials and residents, including Caribbean nationals, in Canada are also weary of visitors coming from Florida and other US regions.

Canada’s government this week extended its border closure to non-essentially travelers from the US. Close US relatives of Canadian residents will be allowed to enter Canada but must be also be quarantined for 14-days.

But Mazie and Carlton Plummer, retired West Kendall residents who visited their daughter and her family in Toronto, Canada annually for the past four years, said their daughter, “Kindly asked us to postpone this year’s visit, as COVID-19 is so bad in Florida. Of course, we are disappointed, but we understand her concern and can’t be selfish.”

A similar scenario applies to South Floridians anxious to travel to Jamaica to visit relatives. “My own wife told me if I come to Jamaica to visit her and my kids I’ll have to quarantine at a hotel before going to my own house,” said Glen Masters who has been pursuing a post-graduate degree in Miami since January. “Looks like everybody want to shun us if we are traveling from Florida.”