Fire destroyed the historic “Iron Market” in Haiti with President Jovenel Moise saying the police were already carrying out investigations to determine the cause of the blaze that destroyed a building that dates back to 1891.

“The news of the Iron Market fire … saddens me a lot. I think of all those who have lost their livelihoods. Police authorities are already working to shed light on this drama,” Moise said indicating that it would cost approximately US$7-million seven to rebuild the facility.

The former Commander-in-Chief of the National Police of Haiti (PNH), Mario Andrésol, said the origin of the fire of a public market in Haiti is rarely accidental.

Source of fire – political or criminal

“It is either political or criminal. The antagonistic groups that cluster around municipal cartels easily make it possible to go up the criminal chain. Politics is something else,” he added, while the Speaker of the Senate, Joseph Lambert, said he was disgusted and dismayed at the fire.

“The Iron Market is burned. Can human beings think a crime like this?” he said, as former president Michel Martelly and former prime minister, Laurent Lamothe, also expressed their disappointment at the situation. 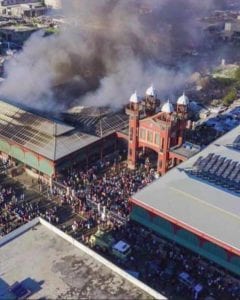 According to residents, a pile of garbage that was set on fire vacant lot near the market, could have spread and cause the destruction of the historic market that dates back to the 1890s Former Haitian president, Florvil Hyppolite inaugurated the building in 1891 after it was shipped in pieces from Paris.

The Marche en Fer, or Iron Market, market was damaged by fire in 2008 and then completely destroyed in the 2010 earthquake. It was rebuilt with international help and re-opened by former US President Bill Clinton in 2011.