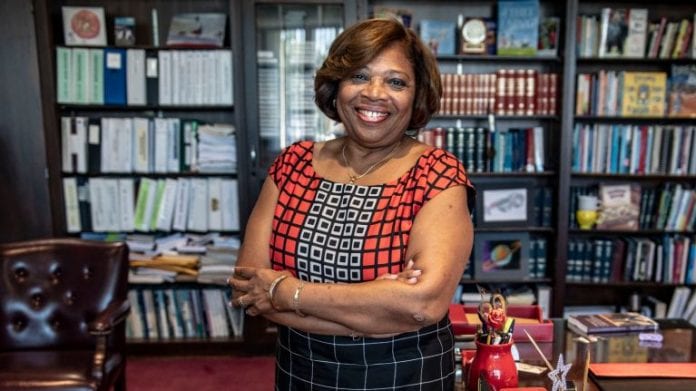 Lewis is a proud maker of history who has broken several racial barriers in New York’s education system.

In 2018, she became the first woman of color to be named president of the New York State Council of School Superintendents. The role, which oversees over 800 educators across the state, will be hers until this July when the school year comes to close.

In 2012, Lewis was the first black educator to gain the title of Superintendent of the Plainview-Old Bethpage school district in Long Island, New York, with nearly 5000 predominantly white students under her watch. She has held this post for seven years and counting. Before Plainview-Old Bethpage, Lewis was the Superintendent of the East Williston in Long Island for five years – also a first for a black educator.

When CNW asked Lewis if she believes her Jamaican upbringing has helped fuel her success, she responded with a resounding yes.

“Without a doubt,” she said. “It framed my work ethic and my can do attitude. Nothing is too big for me to want to challenge, because at Wolmer’s my motto was Age Quod Agis – ‘Whatever you do, do it well’. I came from humble beginnings in Kendal, Hanover, and nothing was given to me. I had to work hard for what I have, and I do not take that for granted. The immigrant status in the current climate of USA makes us all determined to show how much richness we bring to this country, and what role we have played in bringing it to greatness,” she continued.

Now 64, Lewis spent many years navigating a multifaceted and fulfilling career within the state’s education system.

She began at The Collegiate School where she taught Mathematics and Advanced Placement Physics. She has served in various administrative capacities in Rockville Centre school district, as science director in Uniondale school district, and as the Deputy Superintendent in the Three Village Central School District. She has also been an adjunct professor at Hofstra University.

She is a founding member of the New York State’s Council of School Superintendent’s Commission on Diversity and Inclusivity and also co-chairs their curriculum committee. She is a past-president of the Long Island Association of Supervision and Curriculum Development and the Nassau County Council of School Superintendents. She’s a member of the Long Island Stem Hub Board of Champions, and serves on the board of ERASE RACISM and the American Heart Association.

Lewis is also a lauded curriculum expert. She has conducted curriculum audits in several states, and has even testified before the New York Senate on The State of Assessments.

She received an education award from the NAACP in 2004, and has received awards from the Korean Parents Association of Long Island, St John’s University Chapter of Phi Delta Kappa, the Long Island Black Educators Association, the Suffolk County Commission, as well as several others.

Undoubtedly, Lewis is a force to be reckoned with within the education system. However, she remains incredibly humble and spiritually grounded.

When CNW asked Lewis how she managed to remain rounded and content over the years, she said, “First, having God in your life and being willing to allow him to direct your path. Also, being kind to all you meet on your journey, for it is in giving that we receive. And, being grateful for all of life’s lessons, and using them to pave the way for the next opportunity.”

To her younger, Caribbean American counterparts who want to build a thriving career in the United States, Lewis’ sage advice is simple and thoughtful.

“Be focused. Do your due diligence by being over-prepared for all opportunities that will come your way. Embrace and look forward to change as a way to grow,” she shared, as she continues to pave the way for those on their way up behind her.