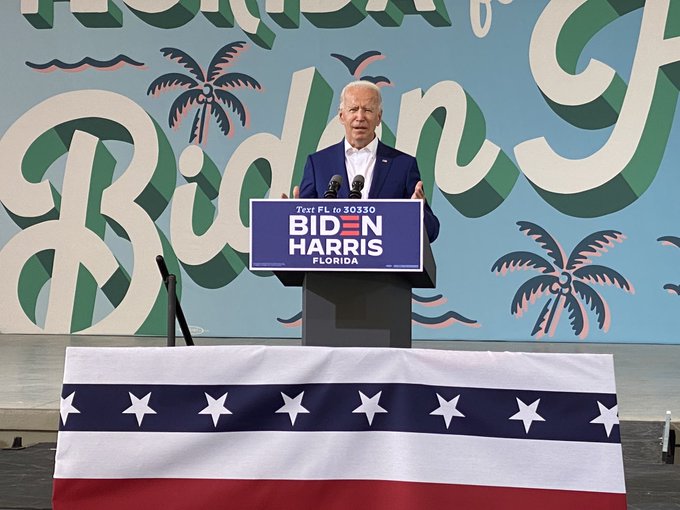 It was high energy in Broward County on Tuesday as Caribbean-Americans, specifically, Jamaican-Americans, and other residents of the county turned out in numbers to support democratic nominee Joe Biden during his campaign stop.

“Trump doesn’t really care about lowering the healthcare costs, because he’s beholden to the health insurance companies and the drug companies,” Biden said. “After all, he’s asking the United States Supreme Court, as I speak, he’s asking them right now, to strike down the entire Affordable Care Act.”

Attendees were wearing N95 masks, and both of Biden’s Broward events were invitation-only, a sharp contrast to Trump’s rally in Sanford, where most of the supporters went unmasked.

Biden later stopped at the Southwest Focal Point Community Center in Pembroke Pines, where he held another event, with about 60 people who all wore masks and had their temperatures checked.

He later headed to the Miramar Regional Park for a drive-in rally. About 60 cars, painted with supporting messages, participated in the rally, where Biden told the crowd, “We win Florida, and its all over.”

#CubanosConBiden in the house at @JoeBiden drive-in rally in Miramar, FL ☀️? pic.twitter.com/RJ9Qv91wV5

Many Jamaican-Americans, including Miramar Commissioner Alexandra Davis, also showed up in their Biden-branded merch to support the presidential nominee. Davis had told CNW Network that she was “thrilled” at his visit to the county.

The democratic party is now leading the way in Florida. More than 1.7 million Floridians have already cast mail ballots, with democrats leading with about 904,000 ballots already cast. But election officials say it could turn around, as Republicans are more likely to vote in person.