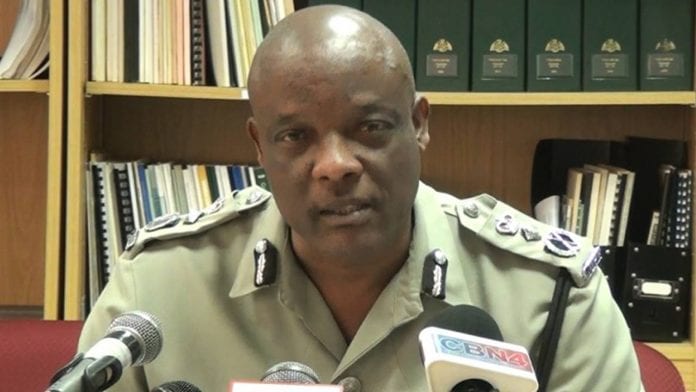 Police Chief Daniel Carbon, who made the disclosure during a press conference here early Monday said 18 persons have also been confirmed missing.

Concerning security, he noted that the police have been kept busy with the latest incident being a prison break that took place late Sunday in which four persons escaped. However, he said two escapees were captured shortly afterwards by members of the police force.

Carbon added that another challenge is that of “massive looting” in the capital and other sections of the island.

“I can report that immediately following the passage of Hurricane Maria, we have had massive looting. Several business places in the city of Roseau and to a less extent in the town of Portsmouth had looting.”

He said that to date 40 arrests have been made. In addition, 86 persons who violated the curfew were also arrested.

But Carbon stressed the situation is under control, thanks to from  security personnel from across the Caribbean. He said, “We now

have the situation under control, we have our regional colleagues here and they are helping us in that regard.”

Also speaking at the press conference was Deputy Police Chief Davidson Valerie, who lamented that young people were involved in looting.

Curfew violators will be arrested

Valerie stressed the importance of observing the curfew.

“We must not catch any resident on the streets. At 4:00 pm (local time), residents must be home. When the police find anyone outside without a permit – you will be arrested. A permit must be obtained from the Chief of Police. Residents must remain inside until 8:00 am.”

Prime Minister Roosevelt Skerrit, in a public statement, assured residents the distribution of supplies is one of the top priorities of his administration.  “We are getting additional help from helicopters….. once we get the supplies, they will be brought from the planes to the helicopters and distributed to the people in masses.”

Skerrit also appealed for order. “What we are seeking to get from the residents is order. Yesterday we did a fantastic job. We are attacking this relief effort from land, from air and from sea.

“Every single community, single family, single home and street will be reached by the authorities in providing supplies. Our clear instruction is for the equitable, non-discriminatory distribution of supplies. We have lots of supplies coming in today and throughout the rest of the week…..” He said.

The prime minister announced that the names of the deceased and missing will be posted shortly. “We are saddened by the loss of life, but at the same time are very fortunate we do not have hundreds, if not thousands, of lives. We thank God for sparing so many of our citizens.”