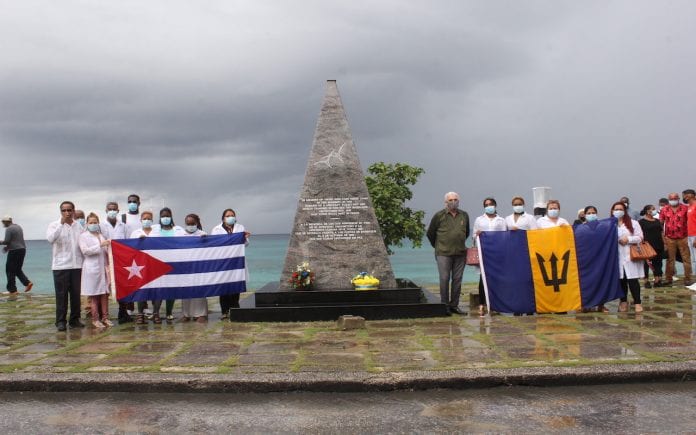 Cuba says the contingent of nurses who were assigned to help Barbados in its fight against the coronavirus (COVID-19) will have their stay extended by another six months.

Cuba’s Ambassador to Barbados, Sergio Jorge Pastrana, speaking at a ceremony marking the 44th anniversary of the Cubana Airlines tragedy on Tuesday, said an agreement had been signed between Cuban and Barbadian authorities on the extension.

“With their help, Barbados will be able to cope with the occurrence of new imported cases of infected travellers coming from abroad, and thus to be able to control any contagion that is recognised through tracing and isolation in such a way as to avoid the occurrence of any local community spread of the virus,” Ambassador Pastrana said.

Meanwhile, Acting Chief Medical Officer, (CMO), Dr. Kenneth George, has advised Barbadians to remain calm in the wake of a COVID-19 cluster which includes two students. The cluster is so far confined to members of one family.

Dr. George expressed concern bout what he described as “unilateral decisions” being made by some institutions in response to this development, which were not based on public health advice.

He said that the Ministry of Health and Wellness had put additional resources in place to ensure a thorough contact tracing process in respect of secondary school, adding “the science of contact tracing is being used to guide the process and this process is well advanced”.

The Chief Medical Officer assured the public that every person and institution that the Ministry perceives is at increased risk based on its investigations will be contacted on an individual basis and tested for COVID-19.

“Please be assured that this is a situation that we take very seriously and our public health professionals are highly trained and capable of investigating and treating to this challenge.

“As of now, the only educational institution we have advised that should be closed is The Ellerslie School. We have seen nothing so far that would warrant any other teaching institution taking action that keeps students away from classes at this time. As CMO, I commit to immediately update the public if that situation changes.”

The cluster within the affected family emanated from a family member who works as a housekeeper and was infected after coming into contact with her employer, who recently returned from the United Kingdom.