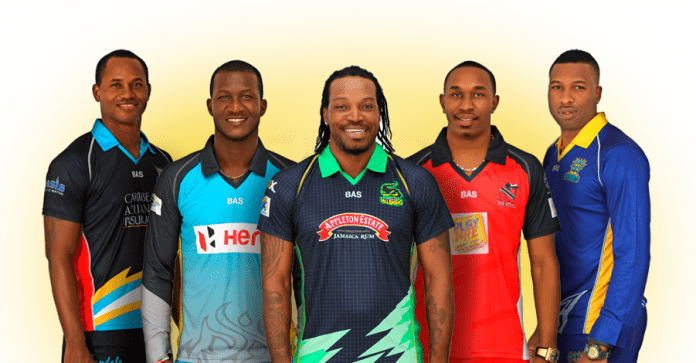 The Hero Caribbean Premier League (CPL) are delighted to announce that a host of West Indies stars – Devendra Bishoo, Carlos Brathwaite, Darren Bravo and Jason Holder – will join up for the opening weeks of the biggest party in sport, which is scheduled to start on Wednesday, 29 June.

The quartet were previously retained on a “free” by their respective franchises at the CPL Draft in Barbados in February and will be available as their sides aim to make their mark in the early exchanges of the CPL.

Carlos Brathwaite, whose match-winning heroics guided the West Indies to their second ICC World T20 title in India a few short months ago, will join St. Kitts & Nevis Patriots in time for their opening home match against Guyana Amazon Warriors on 30 June. This will be the 27-year-old’s second year with the Patriots having previously featured for Antigua Hawksbills and Barbados Tridents.

Bowling All-rounder and West Indies ODI captain Jason Holder will link up with his home team the Barbados Tridents, while Darren Bravo returns to Trinbago Knight Riders where the 27-year-old batsman will link up once more alongside his brother Dwayne. Leg-spinner Devendra Bishoo will feature once more for the Guyana Amazon Warriors

The West Indies team management have agreed to release the retained players, who are currently involved in the ODI Tri Series involving Australia and South Africa, and they will link up with their franchises until 11 July, upon resumption of their international Test commitments with the West Indies for the series against India.

Meanwhile, the St. Lucia Zouks have announced that experienced wicket-keeper batsman Denesh Ramdin will replace the injured Fidel Edwards until 11 July. Ramdin, who has played 58 T20 internationals to date, will then be replaced by left-arm spinner Kristopher Ramsaran for the remainder of the tournament.

CPL CEO Mr. Damien O’Donohoe commented: “On behalf of the CPL and our thousands of supporters across the Caribbean and beyond, I would like to extend a warm welcome to these five West Indies and global superstars for the fourth instalment of CPL.

“Our thanks to the West Indies Cricket Board (WICB), Coach and Chairman of Selection Committee for facilitating the release of the players for the opening weeks of the CPL. It’s a tremendous boost for the competition and I have no doubt that each of the players will be motivated to add great value to their squads.

“All five players know what the passion and the excitement of CPL is all about and are box-office draws across each of the five teams. I know their fans will welcome the players with open arms once more. In welcoming Denesh to the Zouks, we would all like to wish Fidel a speedy recovery and we hope to see him back in action in the near future.”

*Tickets for CPL fixtures in the Caribbean and Fort Lauderdale are on sale now from www.cplt20.com.