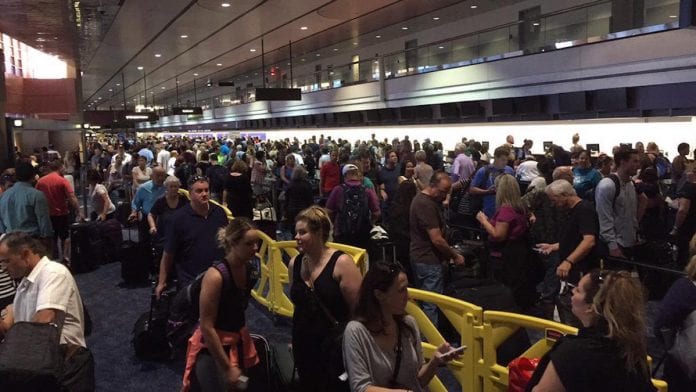 Travelers, some returning from vacations overseas, and others traveling to South Florida for personal and business reasons were stranded for hours at airports In Miami-Dade and Fort Lauderdale. The long, up to three hour delays, and extremely long custom lines, was experienced nationally, caused  by an outage in the computer system used by US Customs and Border Protection.

The outage at South Florida international airports began at around 6 p.m. and continued to just before 10 pm. During these times, several flights arrived from overseas destinations, and long lines extended in the migration and customs halls. In some instances passengers were kept on planes waiting for the crowd waiting on customs to abate.

Among the passengers caught in the frustrating long lines at the Miami-International Airport were Southwest Miami residents Jacob and Melissa Nevers  and their two young sons who were returning from a Christmas/New Year’s vacation in Montego Bay, Jamaica, their home country.

Jacob arrived at the airport shortly after 7 p.m. and was stuck in customs for almost three hours. He described the experience as “very rough. Like torture.” He said he and his family, especially, the boys were hungry, tired and wanted to use the bathroom, and couldn’t. He said it was also very hot and humid in the hall as the crowd made the air conditioning relatively ineffective. He saw people fainting, and vomiting on the floor of the customs hall.

There were also reports of some passengers fainting. These passengers were processed manually by customer officers, and treated by Miami-Dade Fire Rescue.

The custom officers also tried to cope with the computer breakdown by processing passengers manually, but this was a very slow process and did little to alleviate the long lines and wait.

As news and images of the delays at the local and other airports across the nation spread rapidly on social  media, and ‘breaking news’ alerts on television, speculations grew  that the computer outage was caused by illegal hacking. However, officials, while investigating what caused the national failure of the Customs’ computer system, did not give any indication it was due to hacking or any other malicious act.

Share
Facebook
Twitter
Pinterest
WhatsApp
Previous articleAccording to a study by the Institute for Women’s Policy Research, in 2016 15.4 percent of women 18 and older in Florida are living below the federal poverty line of $11,880 for individuals
Next articleUsher feels the reggae beat with chart topper