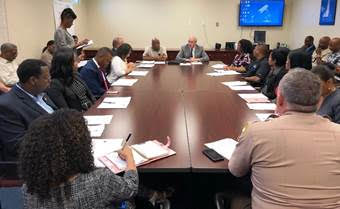 “Operation Blue and Brown is a collaboration between Miami Police and Miami-Dade Police that started on April 9 and it has been extremely successful; we’ve had 86 arrests, 19 confiscated guns, and the kids are now playing outside and are walking to/from school without fear of getting shot or killed,” said Commander Kendra Simmons.

“We are going to continue our footprint and high visibility public outreach in the affected areas,” said Miami-Dade Police Chief Ariel Artime. “I applaud our team and partners for their hard work.”

Brother Lyle from the Circle of Brotherhood made a presentation sharing their initiative and comprehensive plan to strike at the core of the epidemic of crime and violence.

“We need to educate the parents for them to understand the criminal court system, from the time the child is arrested until sentencing,” said CRB Program Director Shirley Plantin. “That’s why the CRB is partnering with Commissioners Daniella Levine Cava and Dennis Moss to hold a forum for the parents on June 14 in Cutler Bay; our main goal is to avoid for the child to be part of the system.

The CRB monthly meetings are open to the public, and residents are encouraged to attend and learn more about the work of the board. For more information, please contact Miami-Dade County Community Relations Board Director Shirley Plantin, EJD at 305-375-1406.