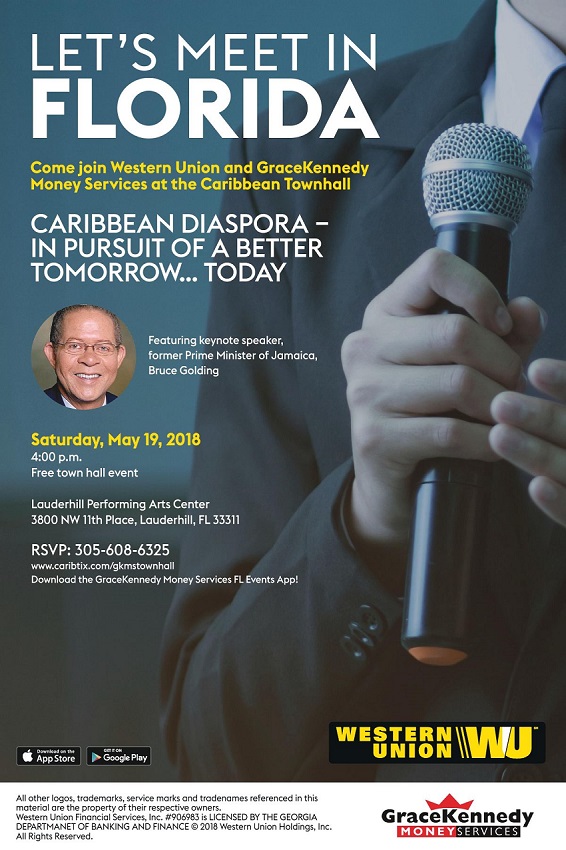 Former Jamaican Prime Minister Orette Bruce Golding will be the keynote speaker for the GraceKenendy and Western Union 2018 Town Hall Series on Saturday May 19 at the Lauderhill Performing Arts Center.

The series is part of Western Union, a leader in cross-border, cross-currency money movement  and GraceKennedy Money Services (GKMS), Western Union’s agent in many Caribbean markets, ongoing commitment to the communities they serve,

The 2018 Town Hall series will take place from May 17 to 19, 2018 in New York and South Florida. Under the theme “The Caribbean Diaspora: In Pursuit of a Better Tomorrow…Today,

Golding, 70, served a Jamaica’s eight Prime Minister from September 2007 to October 23, 2011. He resigned in the midst of controversy related to the extradition of Jamaican Don Christopher “Dudus’Coke, and was succeeded by Andrew Holness as prime minister and leader of the Jamaica Labor party. Since his resignation, Golding has served Jamaica as a consultant on local and international business and other matters, and despite being out of active politics remains a respected member of the Jamaica Labor Party.

Michelle Allen, CEO of GKMS said the company is “very excited for this opportunity to engage once again with the Caribbean diaspora in the United States. These forums are very important not only to connect with our customers and receive their feedback, but also to discuss hot topics, such as consumer protection and how the diaspora can actively engage with and support fraud prevention initiatives.  The contribution of our customers is key, as we explore ways to continue developing and promoting the Caribbean while improving the quality of life for those who live within the region.”

Estebarena speaking on behalf of WU, said, “For Western Union, customer centricity is a top priority and we are fully committed to improve services for our customers in each of the sending and receiving countries where we operate.  We believe the digitalization of our services, in collaboration with our Agents, has an important role to play, as demonstrated by the recent digital launches in the region, including the Westernunion.com/jm transactional website and the cash apps where customers can start a money transfer on the app and pay in cash at an Agent location in Jamaica and the Bahamas.

In 2017, more than US$80billion was sent to Latin America and the Caribbean, according to World Bank’s latest Migration and Development Brief, making remittances an important resource for education, gifting, family support and small investments in the region.

Saturday’s Town Hall event commences at 4:00 pm. The Lauderhill Performing Arts venter is located at 3800 NW 11th Place, in the City of Lauderhill.