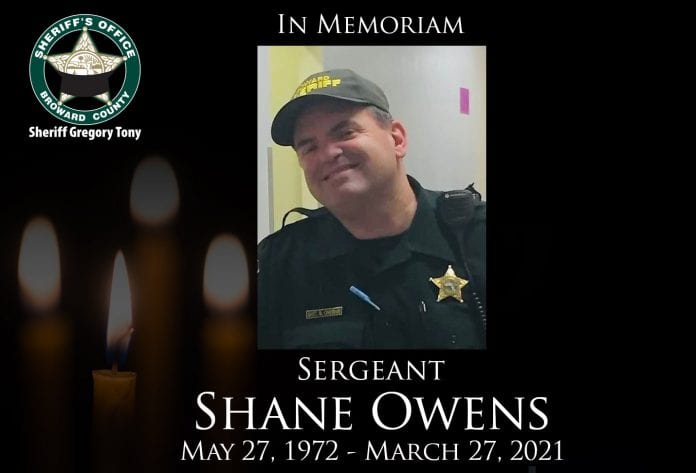 Broward County Sheriff, Gregory Tony has paid tribute to the seventh person in the agency to die of complications from the coronavirus.

The Broward County Sheriff’s Office (BSO) said on its Facebook page that 48-year-old Sgt. Shane Owens died on Saturday. He worked for about 30 years with the agency’s detention department.

He had been hospitalized and on a ventilator prior to his death, the sheriff’s office said.

The SunSentinel reported that Owens’ father, David Owens, also worked for the Broward Sheriff’s Office, serving for 34 years in the Department of Detention and retiring in 2019.

BSO Sheriff Tony paid tribute to Owens on social media, saying that he was a great asset to the department.

“It is with a sad and heavy heart that we mourn the loss of Sergeant Shane Owens, who passed away today following a battle with COVID-19. Sgt. Owens proudly served for nearly 30 years with BSO’s Department of Detention. He was an asset to the organization, who always put extra effort into his duties. His experience, knowledge and problem-solving abilities proved vital in helping his colleagues adjust to the uncertainties that arose due to the pandemic. Thank you for your service and sacrifice, Sgt. Owens. You will be greatly missed”, Tony’s statement read.

According to the Associated Press, Lt. Col. Tim Langelier, the director of the Department of Detention’s Operations and Administration, said, “Shane was a no-nonsense, tell-it-like-it-is supervisor who held people accountable. But more importantly, he taught them how to be the best they could be.

If BSO had a Hall of Fame, Sgt. Shane Owens would be in it.”