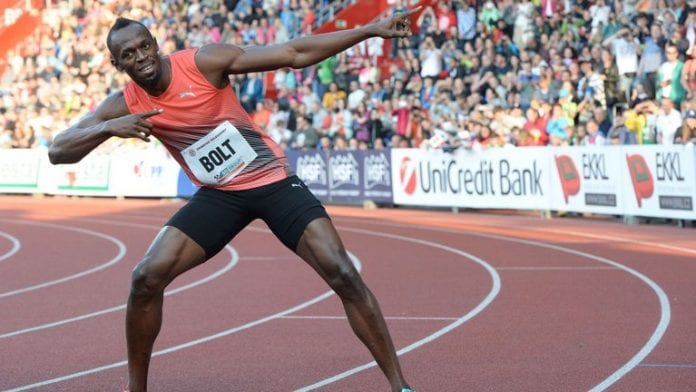 Usain Bolt’s struggled to win his penultimate race before defending his 100 meters and 4×100 meters titles in London before admitting to having a stiff back.

Before the race a glitzy tribute was paid to the King of sprints at the Golden Spike meeting in the Czech Republic. He posed, smiled, danced and was reverend during the singing of Jamaica’s national anthem. But his actual race did not live up to expectations.

The 30-year-old recovered from a sluggish start to overhaul Cuban Yunier Pérez but never really blazed the track in a pedestrian 10.06 seconds.

That was the first time Bolt has recorded back-to-back times over 10 seconds in the same season since turning professional, and a successful defense of his world 100m title in a month’s time now looks far from certain.

However Bolt never displayed a hint of worry.

“I never worry. I always tell you guys if my coach is not worried, I am not worried. I just need to go to my doctor and get everything checked out to make sure everything is smooth and continue training so when my next race in Monaco comes [in the Diamond League on 21 July], I’ll see where I am at,” he told reporters. Watch the race for yourself below.

Bolt confirmed he would fly to Germany to see his doctor Hans-Wilhelm Müller-Wohlfahrt.

“It’s just my back, as always,” he added. “My doctor told me over the years that the older I get the worse it is going to get so I just really have to try and keep it in check. I need to go see him to make sure everything is smooth because it is a bit tight. But I didn’t get injured and that’s the key thing. I am happy about that – it’s just about sorting it out and I should be fine.”

Bolt, however, still looked track-rusty – a fact which he coach Glen Mills said was the result of him missing three weeks of training while grieving for his friend, British High Jumper Germaine Mason, who was killed in a motorcycle accident in Jamaica last month.