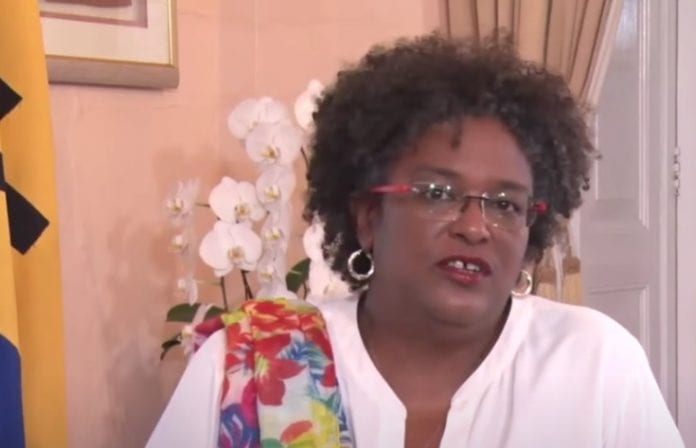 Barbados Prime Minister Mia Mottley on Thursday announced new protocols for visitors who are fully vaccinated against COVID-19 that will allow them to have a shorter period of quarantine.

Under the new provisions, which will take effect on May 8, vaccinated visitors would be allowed to leave a quarantine facility once they return a negative PCR test, while unvaccinated travellers will have to remain in quarantine for seven days.

“A vaccinated person is defined as that person, who, in a two-dose regime had received both doses plus 14 days; or a one-dose regime, one dose plus 14 days,” Prime Minister Mottley explained at a press conference on Thursday evening.

“In essence, it still requires that even though you are vaccinated that you come to the island with a PCR test that is negative within the last 72 hours and that upon arrival in the country or the morning after that you will do a PCR test, whether it is a rapid test or a classic PCR test and that you will have limited movement within the hotel, if you are staying at a hotel, or a Government facility if you are staying at a Government facility.”

Mottley said protocols would continue to be reviewed and a monitoring committee would be established to ensure they were working effectively.

Meantime, the Prime Minister announced at the same press briefing that from April 11, there would be an ease in restrictions for residents, with new COVID-19 cases continuing to drop.

“We have…been conscious that Barbadians have largely responded to the protocols and have largely been cooperative and even though we have a situation that is still uncertain globally we do believe that we have to continue to live,” she said, adding that “the one thing we can’t do is to stay still”.

Praising Barbadians for “rising to the occasion to fight back this pandemic”, Mottley said the time had come for Government to make certain adjustments to allow persons to be “more comfortable not only in terms of where they work, but also in terms of the other things they need to sustain their body and soul”.

The curfew will be shortened on Thursdays to Sundays, running from 11 p.m. to 5 a.m., and will be abandoned altogether Mondays to Wednesdays.

However, nightclubs, theatres, cinemas are to remain closed, and retail stores and supermarkets will continue to be closed on Sundays.

Additionally, the Prime Minister said, the cap of 75 persons for church services is being removed, and a maximum of 100 people will be allowed at funeral services and wedding ceremonies.

As it relates to churches, the 75 person cap for services has been removed, but Mottley said they would still be required to ensure that members of the congregation observe social distancing of six feet.

“Mask wearing will continue at all times as happens elsewhere. The churches were already doing an excellent job in recording and adhering to the protocols before. We recognize that if we adhere to the ratio of the six-foot distancing that we will be in a position to have in larger churches more than 75 persons, and therefore, they should be so allowed to do,” she explained.

A maximum of 100 persons would be able to attend funeral services and wedding ceremonies, once the protocols, particularly that of social distancing, can be observed.

With regard to the hosting of wedding receptions, the Prime Minister made it clear that parties were not allowed, but said persons could host dinners or lunches to celebrate their unions.

The halt on contact sporting activities is still in place, and Mottley said she would be meeting with the various organizations within the next two weeks “to see how we can return to a level of normalcy”.

“It may well be that we start with a framework that allows training and games, but without spectators at this point in time,” she added.

The new measures will be in place until April 26.