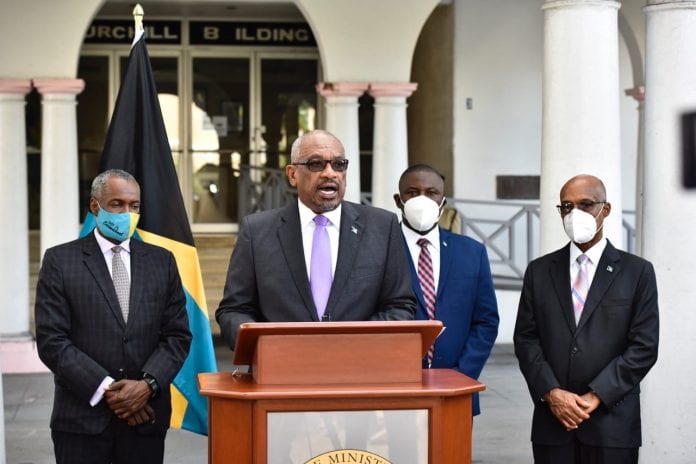 Prime Minister Dr. Hubert Minnis has assumed the position of Minister of Finance after he accepted the resignation last week of K Peter Tunquest amid allegations that he helped to defraud two companies of an estimated US$28 million.

Turnquest, who was also the deputy prime minister, has denied the allegations.

Minnis said that Public Works Minister Desmond Bannister will serve as deputy prime minister with Thompson as his minister of state in the Ministry of Finance.

“To help advance these economic goals and to boost jobs, for the remainder of this term, I will continue to serve as the minister of finance,” Minnis said during his nationwide radio and television broadcast on Sunday.

“As minister of state for finance, I have asked him to focus on the economic needs and recovery of Grand Bahama, Family Island development and the ongoing digital transformation of The Bahamas and the government,” Minnis said, naming also former RBC managing director Nathaniel Beneby as a special economic advisor. Minnis said his team will also include former Central Bank Governor Wendy Craigg, Financial Secretary Marlon Johnson, and Kenneth Kerr, who co-chaired the Economic Recovery Committee with Johnson.

“My economic and financial team will meet regularly to help chart and guide our economic recovery,” Minnis said.

The Prime Minister also announced that J. Kwasi Thompson will be the new Minister of State in the Ministry of Finance.

In a statement, Thompson said that while he is humbled to have been appointed to the post, he is prepared to play his role in revitalising the economy.

“As we navigate our way through this public health crisis the country remains in a vulnerable position. However, the timely and decisive actions of the Government have helped the country to maintain fiscal stability, investor confidence and minimum levels of domestic consumption as we mitigate the economic fallout.

“The government’s prioritization of citizen welfare has meant a focus on feeding programs, income replacement, employment retention and small business development, even as we have had to cut back in many areas. The public can be assured of our continued focus on these critical areas.”

He said he intends to focus on the revitalization, development and full recovery of Grand Bahama and the Family Islands as a part of the National Recovery Strategy.

“I intend to work closely with the competent team of experts and professionals who have been providing policy advice and administrative support throughout this administration and long before. This will allow the Ministry’s work to continue without interruption. I have confidence in their work and plan to jump right in to continue implementing the robust and transparent fiscal and economic policies of the government,” Thompson said, promising to follow his predecessor who “made a habit of engaging in broad consultation with stakeholders through public education and other forms of direct engagement”.