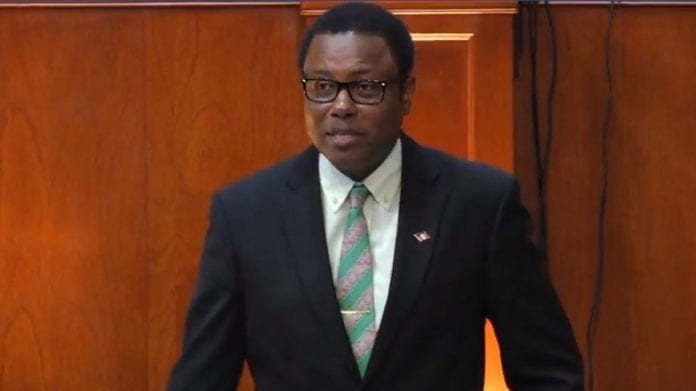 Social Transformation, Human Resource Development and the Blue Economy Minister A. Dean Jonas, has sought to clarify a statement he made regarding the age of consent in Antigua and Barbuda amid calls for his resignation or dismissal by the opposition and a local gender advocacy group.

In a statement, Jonas said that a 13-year-old child cannot give consent to sex, and that the law states that the person must be 16 years old.

Jonas said that he believes that this public declaration is necessary to ensure that no child or adult is of a mistaken view, following an unscripted address he gave to the annual 16 Days of Activism Campaign to commemorate the International Day for the Elimination of Violence Against Women, on Wednesday.

“You may have a situation where the girl, 13 years or older, may have sex with a gentleman much older than her, but it is consensual, she consented. The legal framework will be very harsh on the gentleman so, a lot of times it goes unreported because of that,” Jonas said in his unscripted statement, while attempting to make the point that sexual offences with minors go unreported and that girls and boys under the age of 16 cannot consent to sex.

But the gender advocacy group, Intersect, said that Jonas should make a public apology and retract the statement.

Intersect said that the Sexual Offences Act allows for a 30-year jail term for any man who is found guilty of having sex with a minor.

“What makes the minister’s statement even more sinister is the oversimplification of the phenomenon of grooming and the language used to refer to an abuse as a “gentleman” Grooming a child occurs when an adult abuses their position of trust and befriends a child, establishing an emotional connection with the intention of sexually abusing the child.”

Intersect said that often times when a child is groomed, he or she is “under the impression that they are in a loving relationship and this is often the reason why they are unwilling to report their abuser to the police”.

It calls on the government to condemn the statement by the Cabinet minister as well as provide education to all ministers on the issue of grooming.

The main opposition United Progressive Party (UPP), described Jonas’s statement as “insensitive and flawed” and that there “can be no explanation or excuse for his statements”.

It called for his removal from the government.