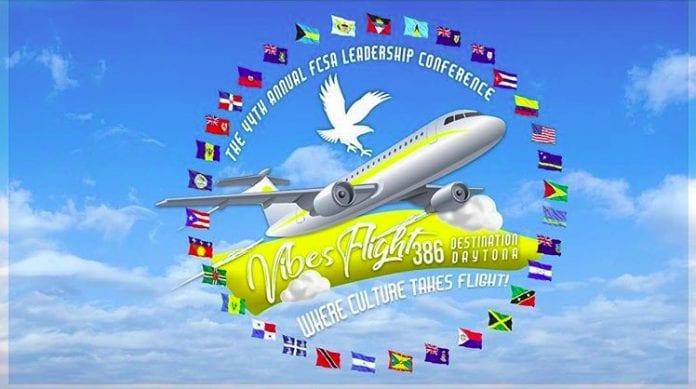 The Florida Caribbean Students Association (“FCSA”) has  announced that celebrated Caribbean artists Lyrikal and Nailah Blackman will headline the inaugural FCSA Caribbean Culture Fest on Sunday, April 15, 2018 in Daytona Beach at Embry-Riddle Aeronautical University (“ERAU”). In addition, renowned Jamaican media personality and executive, Terri-Karelle Reid, will deliver keynote remarks on her secret formula for success in life, business, and culture. She will also serve as guest judge at the annual FCSA Annual Miss FCSA pageant.  The theme of the annual conference will be “Vibes Flight 386, Destination Daytona.”

Over six hundred (600) Caribbean college student leaders from around Florida and the US will converge on the campus of Embry-Riddle Aeronautical University in Daytona Beach, Florida to engage in community service activities, professional and personal development workshops, a Talent and Cultural Showcase, an alumni  reception, and among other activities. Hosted by the Embry-Riddle Aeronautical University Caribbean Students Association, the Conference will also welcome respected business, academic, and community leaders from around the State of Florida, ERAU, and Daytona Beach community.

“ERAU has played a leadership role in the development of FCSA over our organizational history.  We pride ourselves on providing all CSA members with a rich conference experience filled with cultural vibes, inspiration from workshops and our community service project, knowledge from our professional development workshops, and an opportunity to develop lifelong relationships with other CSA members,” stated Oneil Ramdeen, FCSA Treasurer, and ERAU Conference Chair, FCSA 44th Annual Leadership Conference.

“The Florida Caribbean Student Association has long provided Embry-Riddle a direct connection to Caribbean culture, where we have benefited from the infusion of leadership, diversity, and the passion that they bring to our campus. It has been a great pleasure working with FCSA for many years, and I am proud of everything this group has accomplished,” stated Dean Lisa Kollar, Dean of Students, Embry-Riddle Aeronautical University.

Born in Trinidad & Tobago, international recording artist, Lyrikal,  also known as Devon Martin started singing in the church choir at the age 7. At age 13, Lyrikal migrated to the United States and began recording music in 2003 in New York.  Lyrikal has built an extensive catalog, released several hits, and has received 5 COTT (Copyright Organization of Trinidad and Tobago) music nominations (2015), and won the award for People’s Choice Most Popular Single. His repertoire consists of over 40 releases, including his first album, titled “The Journey” in 2016.

As a grand-daughter of Caribbean music icons, Ras Shorty I (her grandfather) and Abbi Blackman (her mother), Nailah Blackman has taken the reins of catapulting the culture into the next generation. Beginning her vocal career at age 11, Nailah joined her aunt’s all-female gospel band, Nehilet Blackman & the AGB, and then segued to a solo singer-songwriter career at fifteen., Nailah is making her mark with her signature vibrato with her Carnival season soca anthems and building bridges to other music genres.

Affectionately known as #MyJamaicanGirl, Dr. Terri-Karelle Reid, describes herself as “the most divinely random person to walk this planet”. Since winning the Miss Jamaica title in 2005, Terri has gone on to earn a Doctor of Medicine in Veterinary Medicine. She has also successfully taken on areas such as Public Relations, Marketing, Project Management, Brand Management and Media (radio & TV).  Terri-Karelle is a motivational speaker in schools and takes part in several charities and is the celebrated host of the highly rated reality show, Digicel Rising Stars.

The 44th FCSA Leadership Conference will have the following anticipated schedule for the weekend, April 12-15, 2018