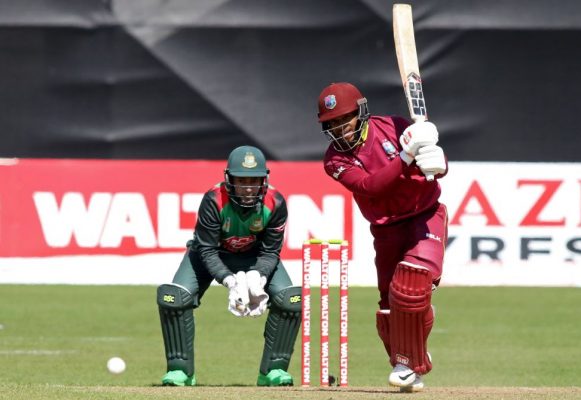 DUBLIN, Ireland, CMC – Left-arm spinner Fabian Allen sent down a costly 25-run over as West Indies failed to hold their nerve when it mattered most, and slumped to a five-wicket defeat to Bangladesh under Duckworth-Lewis-Stern in the Tri-Nations Series final here Friday.

In their final competitive One-Day International ahead of the World Cup beginning month end, West Indies struggled to contain a buoyant Bangladesh as the Asian outfit easily chased down a difficult revised target of 210 with seven balls to spare, in the contest reduced to 24 overs per side.

Left-handed opener Soumya Sarkar struck a sparkling 66 off 41 balls but it was Mosaddek Hossain, batting at number seven, who turned the screws on West Indies with a breathtaking 24-ball unbeaten 52 at the end.

With Soumya in full flight, Bangladesh were cruising to victory at 109 for two in the 12th over but lost three wickets for 34 runs in the space of 25 balls, to leave the result open.

However, Mosaddek slammed a 20-ball fifty – the fastest by a Bangladeshi in ODIs – in a 70-run, unbroken sixth wicket stand with Mahmudullah (19 not out) to snuff out any chance of a West Indies win.

The game, though, was in still in the balance at the start of the 21st over from Allen, with 27 runs required from 18 balls.

But Mosaddek switch-hit the left-arm spinner over the point boundary for six off the first ball and then cleared the ropes at long on with the second delivery. He dabbed the third ball to the third man boundary before lashing the fourth over extra cover for the maximum, to leave the Windies shell-shocked.

All told, the right-hander smacked two fours and five sixes while Mahmudullah faced 21 balls and struck a single four.

The defeat to Bangladesh was the third straight in the tournament for West Indies and seventh in nine meetings over the last 12 months.

Man-of-the-Series Shai Hope had earlier top-scored with 74 while Sunil Ambris stroked an unbeaten 69 as West Indies finished on 152 for one after rain resulted in a five-hour break during their innings.

Sent in, they had reached 131 without loss in the 21st over when the inclement weather drove players from the field.

Once play restarted following a series of inspections, West Indies found themselves with just 23 balls left in the innings and managed only another 21 runs.

Neither batsman looked troubled by Bangladesh’s attack with Hope hammering six fours and three sixes off 64 balls and Ambris notching seven fours in a 78-ball knock.

Hope was the first to his half-century off exactly 50 balls when he struck seamer Mustafizur Rahman for a straight six in the 18th over which leaked 13 runs.

Ambris, who had earlier smashed three boundaries in the 12th over from Mustafizur, reached his second half-century in ODIs with a couple to wide long off leg spinner Sabbir Rahman in the 19th over.

When the rains arrived, Hope was perched on 68 and Ambris on 59 and on resumption, Hope added a further six runs before holing out to long on off off-spinner Mehidy Hasan Miraz in the penultimate over.

Needing to score at nearly nine runs an over, Bangladesh took command of the run chase early through Soumya who played audaciously to belt nine fours and three sixes.

He put on 59 for the first wicket with Tamim Iqbal (18) who was dropped on four off a sitter by Ashley Nurse running back from slip, with the score on 18 in the third over from seamer Kemar Roach.

Left-hander Tamim eventually fell attempting a third straight four off speedster Shannon Gabriel (2-30) in the sixth over, caught at mid off by captain Jason Holder, and when Sabbir Rahman was hit in front without scoring in the same over to the second ball he faced, West Indies were back in the game.

However, Soumya put on 49 for the third wicket with wicket-keeeper Mushfiqur Rahim whose 36 came from 22 balls and included two fours and sixes.

And even though left-armer Raymon Reifer (2-23) got rid of both to claim his first wickets in ODIs and spark a Bangladesh slide, Mosaddek kept his composure to finish the game strongly.