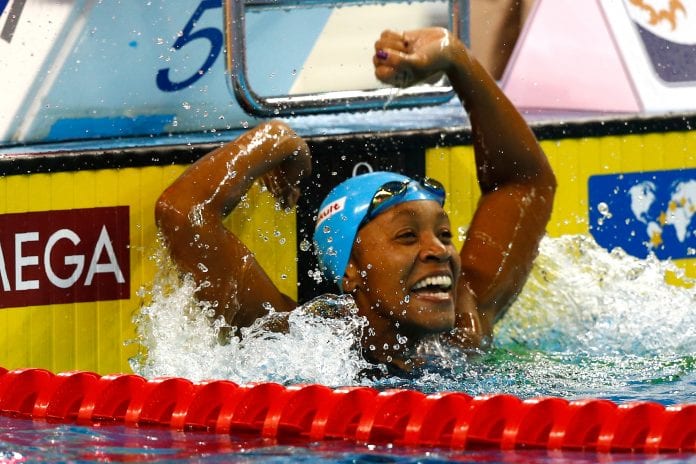 Team Jamaica’s swimmer, Alia Atkinson, has made it out of round one of the women’s 100-metre breaststroke on Day 3 of the 2016 Rio Olympics. Only the top 16 swimmers progressed to the semi-finals.

Atkinson finished second to Russian Yulia Efimova in Heat 5, touching the board in 1.06.72 seconds, just  behind Efimova’s winning time of 1.05.79. Her time represents the seventh fastest time going into the semi-finals and just behind the American, Lillia King,who’s time came in at 1.05.78.

Atkinson has been coached by Chris Anderson since 2001 and mostly trains in the SOFLO swim team in Broward county, which is managed by Anderson. She is already the first black woman to win a world swimming title along with Ruta Meilutyte of Lithuania.

Jamaica’s other swimmer Timothy Wynter did not progress out of the first round, despite a second place finish in Heat 1 of the men’s 100 meter backstroke.

Wynter clocked 57.20 to finish 34th overall out of the 39 swimmers who competed in the heats.

The finals are set for Monday, tonight, starting at 9:54 p.m.