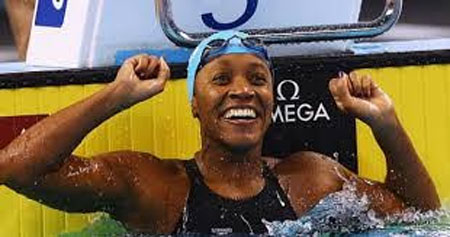 Jamaica’s swimming sensation Alia Atkinson underlined her form on the Fina/Airweave Swimming World Cup circuit when she mined a second gold medal within a week. Atkinson won her second gold medal in the 200-metre breaststroke on Saturday, November 11.

Atkinson, who won gold in the 50m breaststroke on Friday, the first day of the event, closed the Beijing, China leg — the seventh in the World Cup series — with another dominant display.

She signaled her intentions during the preliminary round when she comfortably clocked 2:24.94 to advance to the final with the third-fastest time behind Japan’s Runa Imai (2:23.59) and Denmark’s Rikke Pedersen (2:24.23).

But as she has been accustomed to do, Atkinson set the National Aquatic Centre alight in the final as she turned the tables on her main rivals on the backs of her brisk reaction time of 0.69s at the start.

Atkinson had earlier pulled out of the 100m butterfly, which could be attributed to her strong gold medal performance in the 200m breaststroke.