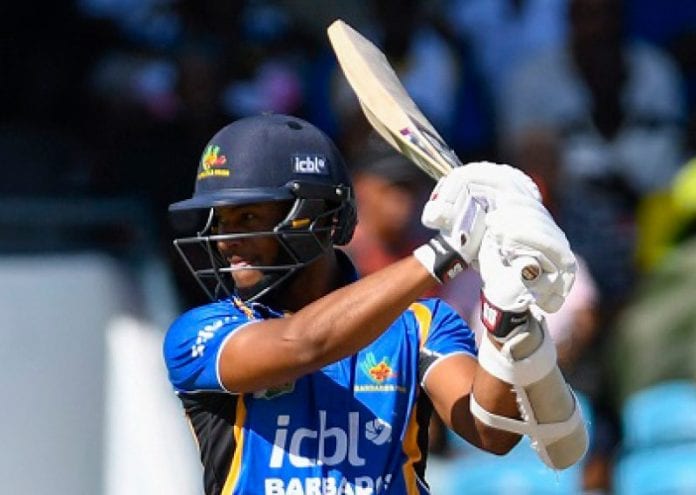 West Indies Test batsman Shai Hope made a sparkling century as Barbados Pride kick-started their preparations for the CWI Super50 Tournament, slated for next year.

Playing at Kensington Oval on Monday, the stylish wicket-keeper/batsman made 115 off 119 balls to lead the Sir Garry Sobers XI to victory over the Sir Wes Hall XI in the opening match of the Barbados Cricket Legend Cup.

Hope, dropped for the ongoing Test tour of New Zealand due to a protracted run of poor form, hit six fours and four sixes as his team reached 289 for seven off their 50 overs.

In reply, Sir Wes Hall XI were 262 for seven off 47 overs when the match was called off due to bad light, handing Sir Garry Sobers XI victory by one run under the Duckworth-Lewis-Stern method.

Hope, who is the highest-ranked West Indies batsman at 11th in the 50-over format in the ICC rankings, played several audacious shots on both sides of the wicket during his elegant knock.

He shared a century stand of 161 for the fourth wicket with left-hander Nicholas Kirton, who made 83 off 90 balls before he was caught at midwicket by Ashley Nurseint in the 38th over off medium-pacer Jonathan Carter who was the best bowler with two for 36.

Hope was fifth out at the start of the 46th over, dismissed by Barbados seamer Justin Greaves who picked up two for 55

Fast bowler Akeem Jordan, who represents Combined Campuses and Colleges in the regional one-day tournament, was effective with the new ball and ended with two for 41.

The run chase was equally exciting with two electrifying half-centuries from Greaves who top-scored with a run-a-ball 61 and wicket-keeper Tevyn Walcott who belted 55.

Walcott faced 65 balls and struck two fours and three sixes, putting on 66 for the third wicket with the former West Indies batsman Carter whose 29 came from 34 balls.

When both perished in the space of two balls in successive overs, Greaves arrived to crunch four fours and two sixes in a 54-run fifth wicket partnership with Jameel Stuart (32) before adding a further 68 for the sixth wicket with Shamar Springer (24 not out).

Fast bowler Jair McAllister was the best on show with two for 36 off eight overs while off-spinner Chaim Holder bagged two for 68 off his full quota.

The three-team tournament continues on Thursday at the same venue when Sir Charlie Griffith XI clash with the Sir Garry Sobers XI.