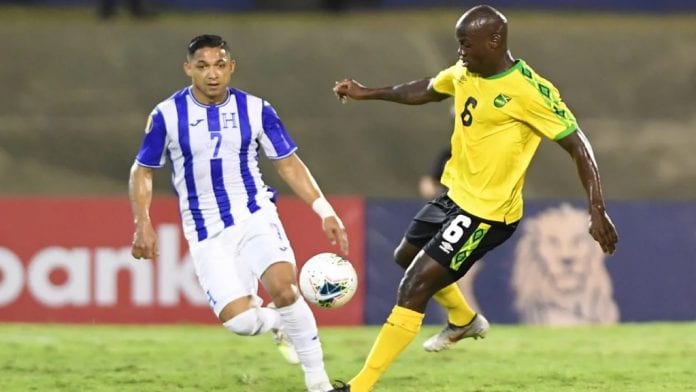 KINGSTON, Jamaica – Jamaica’s Reggae Boyz secured a surprise win to cap off their historic hosting of a Concacaf Gold Cup doubleheader with a 3-2 win over Honduras.

The match, held at the National Stadium in Kingston on June 17, was the first time a Gold Cup finals match had been held in the Caribbean. A total of 17,874 spectators, many of whom came out to see Bayer Leverkusen striker Leon Bailey make his debut for the national senior team, witnessed the historic victory.

Honduras went into the match as the top-ranked group seed and firm favourites. But host team Jamaica, who have been the losing Gold Cup finalists in 2015 and 2017, have a habit recently of reserving their best form for this competition. They opened the scoring in the 15th minute when Dever Orgill headed home from close range.

In the 41st minute, he doubled the lead, finishing off some sharp passing inside the box by the Jamaicans. This was followed by Honduras’ first goal, scored when Alberth Elis broke free to slide a pass across goal for Antony Lozano to convert.

Jamaica responded just a few minutes later with a header by Damion Lowe extending the lead to 3-1 in the 56th minute.

Honduras battled on and substitute forward Rubilio Castillo pulled a goal back in stoppage time to make the final score 3-2.

The Reggae Boyz are scheduled to leave the island on Tuesday at 1 pm via charter for Houston, Texas for their next game against El Salvador on Friday.

The 2019 Concacaf Gold Cup is scheduled to run from June 15 to July 7. The bi-annual tournament will primarily be hosted in the United States, with Costa Rica and Jamaica also hosting doubleheaders in the first round of matches in groups B and C, respectively.

UWI Defends Decision to Quote Tuition Fees in US Currency