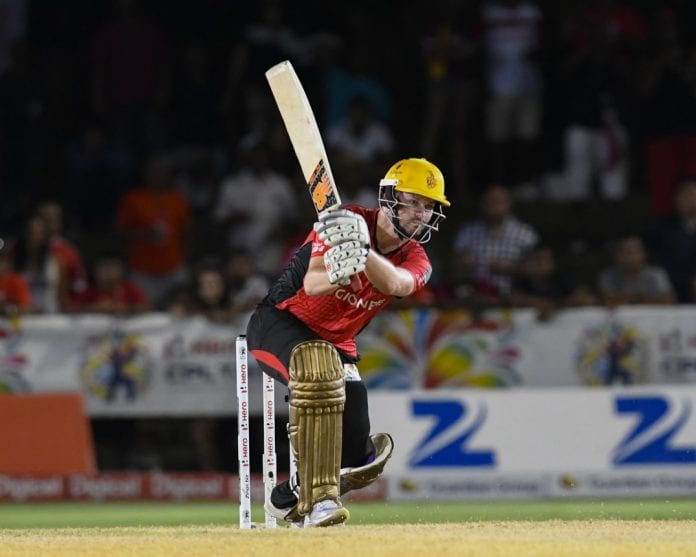 New Zealander Colin Munro stroked his second half-century of the tournament as Trinagbo Knight Riders posted a franchise-record seventh straight win after brushing aside Jamaica Tallawahs by 19 runs on Tuesday.

Already qualified for the final four, TKR continued to flex their muscle with 184 for four off their 20 overs, after being sent in at the Brian Lara Stadium.

The left-handed Munro, coming off two successive ‘ducks’ and with just 17 runs in his last three innings, punched a top score of 65 off 54 balls.

Captain Kieron Pollard smashed a 16-ball unbeaten 33 towards the end to follow up small contributions from openers Sunil Narine (29) and Lendl Simmons (25).

In reply, New Zealander Glenn Phillips struck 41 at the top of the order but the remainder of the Tallawahs batting collapsed, and even though Andre Russell top-scored with an unbeaten 50 off 23 deliveries in his first game back after a missing a couple of matches, the effort came too late to help his side.

The victory pushed TKR to 14 points and guaranteed them of at least a second place finish in the standings. They are four points clear of St Lucia Zouks who have also played seven games.

For Tallawahs, the defeat hurt their chances of a semi-final spot, keeping them fourth on six points – the same as third-placed Guyana Amazon Warriors and just two ahead of fifth-placed Barbados Tridents.

TKR’s innings was driven by partnerships with Munro at the heart of two key ones. He put on 46 for the second wicket with Simmons who belted two sixes off 28 balls before adding 33 for the third wicket with fellow countryman Tim Seifert (18).

When Seifert perished in the 15th over, however, TKR were still only 111 for three and in need of precious runs to reach a competitive total.

Pollard then joined Munro in a punishing 73-run, fourth-wicket stand which gave TKR a rousing end to their innings.

The right-handed Pollard blasted a four and three sixes while Munro counted 10 fours and a six before perishing off the final ball of the innings, to give seamer Carlos Brathwaite (2-36) his second wicket.

Tallawahs stumbled at the start of their run chase when left-arm spinner Akeal Hosein removed Chadwick Walton to a catch at point off the first ball of the innings and Khary Pierre, another left-arm spinner, bowled Jermaine Blackwood (12) in the next over missing a heave.

Tottering on 12 for two in the second over, Tallawahs were propped up by Phillips and Nkrumah Bonner (26) who put on 64 for the third wicket.

Leg-spinner Fawad Ahmed (2-21) then made key strikes while off-spinner Sunil Narine, who missed all three of TKR’s games at Queen’s Park Oval, dried up the scoring in a stingy four-over spell, as Tallawahs lost four wickets for 19 runs off 20 balls.

With his side floundering on 97 for six in the 15th over, Russell arrived to lash five fours and four sixes in a 68-run, unbroken seventh-wicket stand with Brathwaite (21 not out).

The West Indies star reached his half-century off the last ball of the innings when he swatted Pollard over mid-wicket for six.