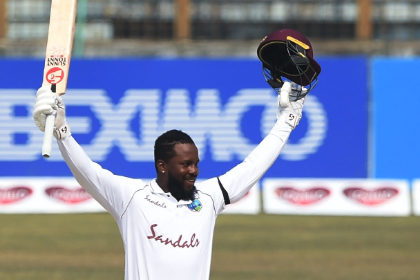 Kyle Mayers has vaulted into the top 100 of the International Cricket Council’s players rankings following his historic unbeaten double century in the opening Test against Bangladesh.

The 28-year-old has entered the batting rankings at 70th with 448 ratings points, which represents the best ever rankings debut by a West Indies player and the second-best by any player in more than 100 years.

Mayers struck 40 in the first innings and then followed up an amazing 210 not out as West Indies chased down 395 on the final day in Chattogram to stun the hosts by three wickets and take a 1-0 lead in the two-Test series.

Opener Kraigg Brathwaite, leading the side in the absence of regular captain Jason Holder who declined selection for the tour, also found himself on the rise in the rankings, moving up eight places o 53rd.

The right-hander top-scored with a fluent 76 off 111 balls in the Windies first innings of 259.

Another first Test debutant, Nkrumah Bonner, has entered the rankings at 88th following his 86 in the second innings, in a 216-run fourth-wicket stand with Mayers.

Jermaine Blackwood, meanwhile, is the highest-ranked West Indies batsman at 29, jumping two places following his 68 in the first innings in Chattogram.

He is one of only two West Indies players in the top 50, with Holder in at 43rd despite missing the first Test.

New Zealander Kane Williamson has retained his place at the top of the charts with Australian Steve Smith still lying second.

In the bowling, spinners Jomel Warrican and Rahkeem Cornwall enjoyed a bump to move into the top 60 of the rankings.

Warrican, a left-arm spinner, rose 14 places to 62nd after claiming seven wickets in the first Test while off-spinner Cornwall jumped six spots to 65 after picking up five wickets.

Holder remains the only West Indies bowler in the top 10 at tenth while seamer Kemar Roach remains 15th and speedster Shannon Gabriel, 18th, after taking one and three wickets respectively in Chattogram.