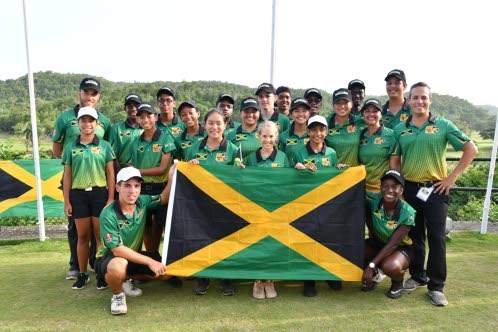 The Jamaica Golf Association (JGA) has announced its 17-member team to the 34th Caribbean Amateur Junior Golf Championship, which is scheduled for July 30 to August 4 at the Punta Blanca Golf Course in Punta Cana, Dominican Republic.

The team includes four reserve players and boasts a mixture of experienced and new players who will compete in six age group categories — three each for girls and boys. The 18 and under boys are Rocco Lopez, Michael Lowe, Radino Lobban and Zaniel Knight (reserve).

Lopez, who is making the team for the fifth time, is the most accomplished player on the team, having won the Bob Slatter trophy for 13 & Under back in 2018 when the championship was held in Jamaica.

The two 18 and under girls are Emily Mayne and Eryn Blakeley. Mayne will be making her fifth appearance for the team while it will be the third time for Blakeley.

Aman Dhiman, Trey Williams, Ryan Lue and Noah Azan in reserve will compete in the boys’ 15 and under category. Dhiman posted the second lowest score of four under par 68 at the Caymanas Golf Club recently in the JGA’s National Golf Championship which went to Justin Burrowes who scored the lowest round of 66 on the final day.

Mattea Issa, Winni Lau and Mia Cunningham (reserve) were named to the girls’ 15 and under category. Issa and Lau will be making their fourth appearance at the championship while Cunningham is in her debut year.

The 13 and under boys’ category will see Aarron Khosh, Ramsay Wayner and Kemari Morris as reserve player. This will be Khosh’s second time being named on the team and Morris’ first time. Wayner’s listing on the team is provisional as he is 10 years old. His ability to play will depend on whether JGA gets permission from the Caribbean Golf Association due to his age.

The final age group category, the girls’ 13 and under will be filled by Samantha Azan and Anoushka Khatri. This will be Azan’s second time being named to the team while her first time playing. She was named in 2020 but there was no competition due to the COVID-19 pandemic. Khatri is getting her first call up for the team.

Ryan Lue and Aarron Ghosh were also named to the team in 2020 but will be actually seeing playing time for the first time as there was no championship in 2020.

Team manager Alison Reid has high expectations for the team. “The junior golf team for 2021 is actually a pretty strong team. There are a lot of experienced players on it, players that have played three, four, five times so it bodes well from an experience point of view. We also have strong juniors in each age group so we at least have one strong player in each age group and then the second place person is also pretty strong.”

She also said that this time there will be two coaches during the championship. “With our two coaches that we are gonna have this year — Jonathan Newnham and Jason Lopez — I think both coaches bring different strengths to the table and I think those strengths can only help the team to be its best, both the actual game of golf to the mental game of golf so we look forward to a very successful tournament.”

Several golfers have in the past won age group trophies including Jonathan Newnham, Justin Burrowes and Rocco Lopez. However, the country is still looking for its first country trophy after placing second in 2018 at home and in 2019 in The Bahamas.