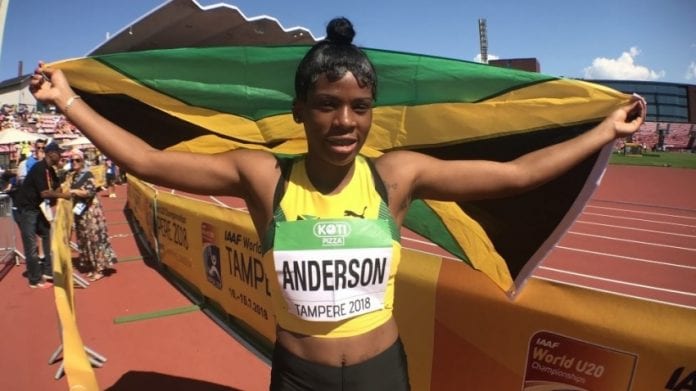 KINGSTON, Jamaica – Jamaica’s Britany Anderson is the only Caribbean athlete that has been named among the five finalists for the 2019 Female Rising Star Award to recognise this year’s best Under 20 athlete.

The International Association of Athletics Federations (IAAF) announced the finalists on Monday with less than three weeks to go until the World Athletics Awards 2019.

The 18-year-old made the list as a result of her performance in the women’s 100m hurdles at the Motonet Grand Prix meeting in Joensuu, Finland on July 24 where she twice broke the world Under 20 record.

Anderson’s time is also a new national junior record, surpassing the effort of Rushelle Burton, who ran 12.87 back in July of 2016.

Anderson, the 2017 world U18 champion and silver medallist at the World U20 championships last summer, arrived in the eastern Finnish city with a 13.01 best set at last year’s championships in Tampere.

The winner will be announced live on stage at the World Athletics Awards 2019 in Monaco on Saturday, November 23.