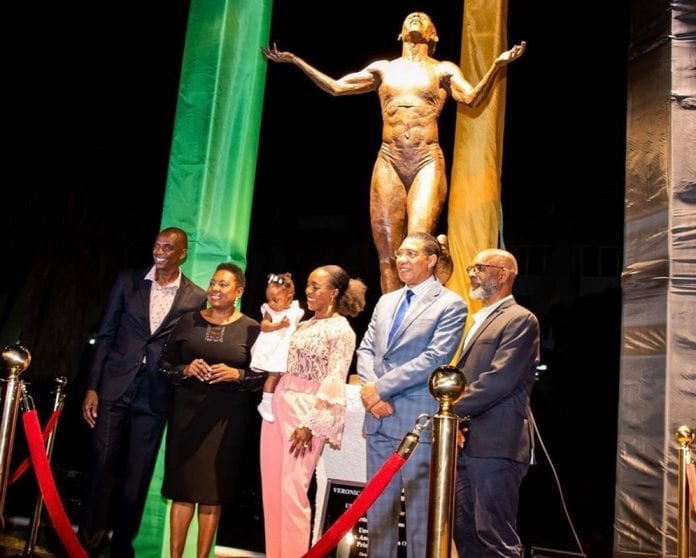 KINGSTON, Jamaica – Outstanding Jamaican sprinter, Veronica Campbell-Brown, “VCB”, was honored by the government for her significant contribution to Jamaican athletics with her own statue at the national stadium in Kingston. 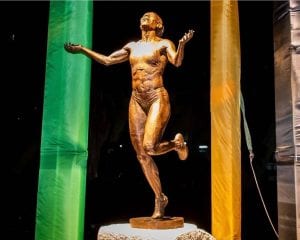 The official unveiling ceremony took place on October 20 in the Statue Park of the National Stadium, with National Sports Minister Olivia Grange and Prime Minister Andrew Holness present. Campbell-Brown was accompanied by her husband Omar Brown, the 2006 Commonwealth Games 200-metre champion, and her eight-month-old daughter, Avianna.

The sprinter’s life-sized, bronze statue, sculpted by renowned Jamaican artist Basil Watson, was mounted next to that of retired Jamaican Sprinter Merlene Ottey, who Campbell-Brown has always considered an idol and mentor.

The statue is the third of four statues that are to be mounted in the national stadium by the Ministry of Entertainment, Youth, Sports and Culture. Statues of eight-time Olympic gold medallist Usain Bolt and now four-time World Champion Shelly-Ann Fraser-Pryce have been mounted over the last three years. With VCB’s statue now up, only that of former 100-metre world record holder Asafa Powell is left to join them.

Speaking at the ceremony, 36-year-old Campbell-Brown was the gesture was an “absolute blessing”.

“To be remembered and commemorated for my contribution to Jamaica’s rich history in this unique way is an absolute ­blessing and a gesture that I greatly ­appreciate,” she said, addressing the audience. “I’m just grateful to be among Jamaica’s rich history and persons like her have set the pace for all of us who came after her. So I’m grateful to be here among these great athletes”, she added.

With the official unveiling ceremony held the day before the nation celebrated National Heroes Day, Prime Minister Andrew Holness said Jamaica must recognize in its athletes’ victories, the triumph of the nation.

“We revel in the fact that these stories of outstanding achievements are for the rest of us the inspiration we need as we play our part in advancing the prosperity of our people,” he said. “Moments like these form part of the platform for us to engage with each other and commit to the transformation of our country. It is proof that there is nothing we cannot overcome once we set our minds to it and work assiduously in unison.”

In a career that has spanned more than two decades since she first represented Jamaica as a junior athlete, VCB, has won 19 senior global medals including three Olympic gold medals and three gold medals at the IAAF World Championships.

She has also won more than 50 medals while representing her country during that time. She won her first Olympic title in the 200m in Athens in 2004 and then defended the title in Beijing in 2008.

Campbell-Brown gave birth to her daughter in February of this year which ruled her out of competing at the recently concluded world championships. The sprinter has said that she has no intention of retiring, and is focused on getting back in shape for the next athletics season.