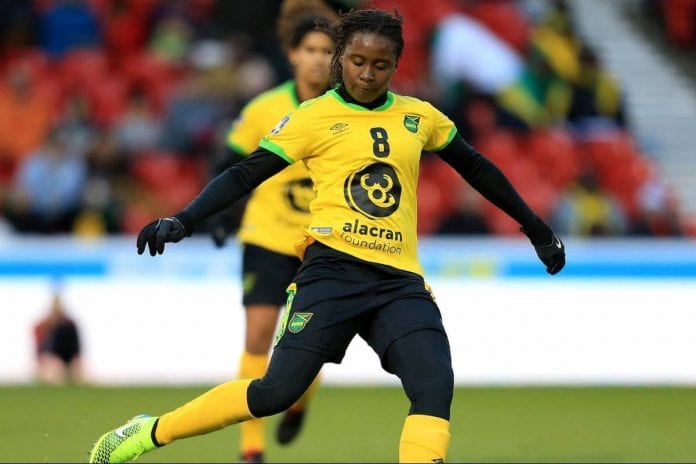 KINGSTON, Jamaica – The Jamaican football community is mourning the death of slain Reggae Girl, Tarania Clarke, the midfielder for the Jamaican women’s senior football team, who was killed in Kingston on October 31.

Reports are that the 20-year-old athlete was stabbed with a knife by another female in a dispute over a cellphone in Half-Way-Tree. She later passed away at a hospital in Kingston, having succumbed to her injuries.

The Reggae Girlz Foundation and the Jamaica Football Federation both made tributes to the footballer, who was affectionately called “Plum Plum” by her teammates and coaches.

President of the Jamaica Football Federation, Mr. Michael Ricketts stated in his statement that he was saddened by the news.

“The Jamaica Football Federation (JFF) is indeed deeply saddened by the untimely passing of young Ms. Clarke, someone who would have shown so much promise, not just as a player but as a person. I must use this opportunity to personally and certainly on behalf of the JFF extend my most profound condolences to the immediate family members and friends of Ms. Clarke, her school family at Excelsior and of-course her club Waterhouse. The JFF must give as much support as we can during this time of bereavement to her mother and close friends.”

Meanwhile, the Reggae Girlz Foundation President Michelle Adamolekun said that football truly changed Tarania’s life. “Tarania “Plum-Plum” Clark was the breadwinner for her family at the tender age of 20. Football provided her with the opportunity to develop academically and athletically, to travel and to utilize her talents to achieve her dreams and goals. Tarania’s Family, community, teammates and friends are mourning the loss of a beautiful young woman.”

Clarke scored for Jamaica on debut when Jamaica drubbed Cuba 12-1 at the National Stadium in Kingston on September 30. The 20-year-old midfielder was also captain of the Waterhouse FC in Jamaica’s Women’s League.

Clarke was a recent graduate of Excelsior High School where she was also captain of the football team. Her coach Xavier Gilbert, devastated by the news, described Clarke as a wonderful individual who put the needs of others before her own.

“We were very close. She was captain for the last three years and was a wonderful leader, a wonderful person,” he said.

He revealed that Clarke was set to leave Jamaica in January 2020 for school at Daytona University in Florida and was awaiting the completion of paperwork.

Other tributes came from the Minister of Culture, Gender, Entertainment and Sport, Olivia Grange who said the incident was a “senseless killing” and Cedella Marley, one of the major investors of the Reggae Girlz, who said she was heartbroken by the news.

Just last month, the Reggae Girlz pulled off four stunning wins against Cuba, Barbados, St. Lucia and the US Virgin Islands to top the Caribbean zone of the qualifiers. The girls advanced to second round of Olympic qualifiers to be played in February 2020. The top two teams from that final round of eight will advance to the Tokyo Olympics next summer.