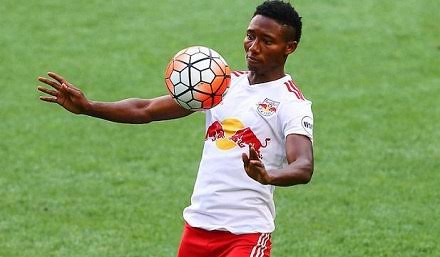 Playing before a 14,456-strong crowd in the final at Slugger Field, the game appeared headed for extra time with the scores locked nil-all, until Cameron Lancaster struck two minutes from time to settle the contest.

Williams collected a throw-in on the right from Kyle Smith and curled a cross into the area where Lancaster out-jumped two defenders to nod past goalkeeper Adrian Zendejas.

Louisville head coach, James O’Connor, praised both the goal-scorer and Williams in the match-winning strike. “A fantastic header from Cameron. Great ball from Speedy (Williams) and a phenomenal header from Cameron to be falling back like that and guide it into the corner, it just shows the quality he has,” O’Connor said.

“For us to win and score so late, it just makes it all the more special. A really incredible moment for everyone connected with the club.”

Louisville’s Trinidadian goalkeeper Greg Ranjitsingh then played a key role in leading the back line as they held off a late charge from the visitors who searched desperately for the equalizer.

The 24-year-old was on hand to punch away a threatening delivery from Felipe Hernandez, in a frantic period of stoppage time as Louisville held firm to claim their first title.

Louisville had earlier made a strong start to the final and could have been ahead after just seven minutes, but Paco Craig saw his free kick waved off for off-side.

Rangers suffered a similar fate when Kharlton Belmar had his clinical strike also ruled out.

In a game of very chances, Ranjitsingh found himself pressed into action early in the second half when he stormed off his line to deny Belmar, as the striker attempted to get onto the end of a through ball in the penalty area.