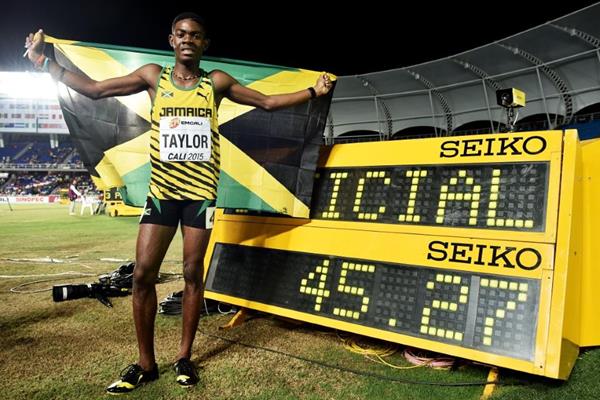 Jamaica once again underlined their dominance of the CARIFTA Games in Curacao by amassing 86 medals -39 gold, 28 silver and 19 bronze – in the three-day competition held between 15-17 April.

The regional athletics competition for Under 18 and Under 20 athletes was attended by IAAF President Sebastian Coe, NACAC President Victor Lopez and fellow IAAF Council Members Stephanie Hightower and Pauline Davis-Thompson among other athletics dignitaries.

The Jamaicans stamped their authority from the opening day where they broke two field event records. Roje Stona, competing in the Under 20 boys’ discus, launched his first attempt out to 66.41 meters, erasing his countryman Chad Wright’s seven-year-old record of 63.11 meters. Fiona Richards, threw 54.19 meters in the girls equivalent to smash the 15-year record set by Claudia Villeneuve of Martinique.

In the Under 18 girls’ high jump, Janique Burgher and Lamara Distin collected Jamaica’s first two medals on the opening morning claiming gold and silver with clearances of 1.77 meters and 1.74 meters respectively.

In the afternoon, the Jamaicans led by team captains Christopher Taylor and Junelle Bromfield captured three out of four of the 400 meters finals.

Bromfield, the IAAF World U20 bronze medallist, looked in commanding form as she destroyed the field in 53.51. The battle for second between Barbadian Tiana Bowen and Jamaica’s Kimorla Mushette was extremely close after both athletes registered 55.62; Bowen got the nod by .001.

Taylor, the 2015 World youth champion, made light work of the opposition registering his second sub-46 clocking this season as he cruised to victory in 45.97 in the Under 20 boys’ 400 meters. Caymanian Jamal Walton, Taylor, was a distant second in 46.46. In the Un der 18 boys’ 400 meters Jamaica’s Antonio Watson (47.86) and Ramone Lindo (47.99) copped the gold and silver respectively.

Megan Moss of Bahamas halted the Jamaican winning streak in the quarter-mile events with a convincing victory over Kimara Francis (54.24) in the Under 18 girls’ 400 meters. Moss won in 53.69, a new personal best.

Trinidad and Tobago’s Tyriq Horsford continued his country’s rich legacy established at these games by 2012 Olympic champion Kershorn Walcott, when he set a new record in the boys’ Under 18 javelin, throwing 76.50 meters. Latia Saunders of Bahamas won the Under 18 girls’ javelin with 45.29 meters.

Glenn Kunst of Curacao, who won the Austin Sealy award, sent the home crowd into raptures when he soared to 4.65m in the pole vault to erase the meet record (4.60m) set by Jamaica’s K’Don Samuels in 2008. He was involved in a keen tussle with Baptiste Thiery of Martinique who led, based on count back, up to 4.50m.

Jermaine Francis of St. Kitts and Nevis etched his name in the record books when he raised the high jump bar to 2.22 meters and cleared it to replace joint record holders Damon Thompson (Barbados) and Jamal Wilson (Bahamas) who both cleared 2.20 meters in 2001 and 2007 respectively.

Daniel Cope became the first Under 18 athlete to launch the shot put beyond 18 meters. The Jamaican did it with his final effort (18.17 meters). Cope returned on the final day to set another record (61.25 meters) in the U18 discus. Lacee Barnes won the Cayman Islands’ first gold medal when she threw 13.06 meters with her last effort in the Under 20 girls’ shot put to upstage early leader Sah-Jay Stevens (13.02 meters) of Jamaica.