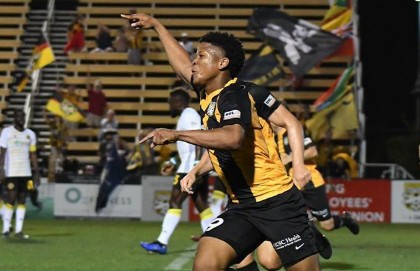 Teenaged Jamaican Nicque Daley scored one of the most important goals of his United Soccer League career as he helped put Charleston Battery in the Eastern Conference semi-finals with a 2-1 win over Charlotte Independence last weekend.

Playing at the Sportsplex at Matthews on Saturday night, the former Under-20 international struck in only the third minute to give Battery a 1-0 half-time lead, before Hugh Roberts equalised in the 64th minute.

After the contest headed to overtime, Arthur Bosua scored in the first period of extra time to earn the visitors a hard-fought victory.

Battery also featured Bermudian winger Zeiko Lewis and Trinidad and Tobago’s Leland Archer, both of whom played the full game while Jamaican striker Dane Kelly came up empty-handed for Charlotte in his time on the pitch.

“The guys played great. We went up early and then the game was pretty open which you expect in the playoffs,” Charleston head coach Mike Anhaeuser said.

“They were pushing numbers forward the whole game. It was a very offensive game which is not always the standard for Charlotte vs. Charleston.”

On a rainy night in the American southeast when lightning forced the start to be delayed by an hour, the 19-year-old Daley etched his name in the record books when he notched the third-fastest goal in USL Championship playoff history with a third-minute strike.

Lewis played a superb through ball off the wing to Mauro Cichero who came down in the box under pressure from two defenders. However, Daley quickly pounced on the loose ball to beat goalkeeper Brandon Miller to his right for his sixth goal of the season.

Roberts brought his side level after the break when he poked home from close range after Jake Areman’s free-kick triggered a goalmouth scramble.

Substitute Arthur Bosua got the winner in the 101st minute when he nodded in a floated free-kick into the area and Kelly then squandered chances in the 103rd and 108th, as Charleston held on for the crucial win.