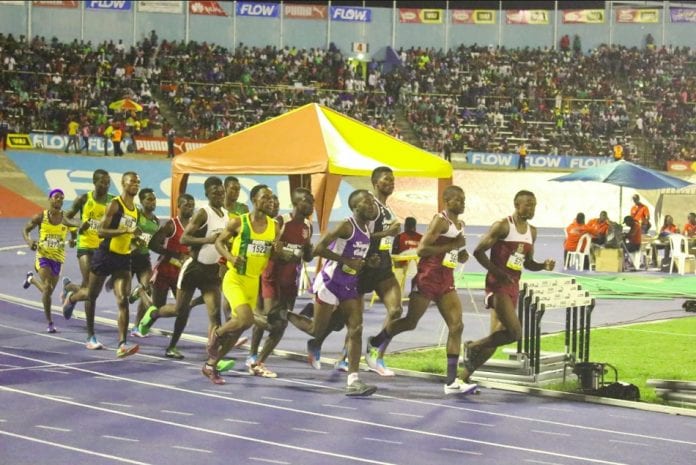 From all accounts, the highly acclaimed Inter-secondary Schools Sports Association (ISSA) Boys’ and Girls’ Athletics Championships seems set to be held at Kingston’s National Stadium from May 11 to 15.

Approval was granted by the Jamaican government recently after many months of lobbying by the organizers, ISSA. It should be noted that the event, one of the most popular high school championships in the world, was canceled last year due to the effects of the novel coronavirus pandemic. It will be held behind closed doors and with a significantly reduced number of athletes and the strictest of protocols to mitigate against the spread of the virus.

It is understood that measures have been put in place to have athletes not congregate before or after events, thus reducing the risks of forming clusters.

Outside of horse racing, track and field were one of the few sporting disciplines granted permission by the government to resume activities last year. However, as COVID-19 cases increased, that permission was rescinded, which left many onlookers baffled as the sport is not considered a contact sport, plus based on all reports, those involved in the meets that were allowed last year complied with the stipulated protocols.

There was a lot of anxiety as the government technocrats deliberated on the pros and cons of granting permission for track and field to resume, including the popular ISSA GraceKennedy Boys’ and Girls’ Championships.

From our vantage point, we sympathize with the government’s approach to managing sport at this time, but obviously, there needs to be a reset in its thinking.

The public health of any nation is one of the most significant responsibilities of any government and it takes precedence.

However, it is the view of many that whilst that maybe so, the government also has a responsibility to protect the mental health of its citizens as well, and sometimes there is a very thin line that calls for a delicate balancing act to create that equilibrium.

On one hand, it would appear to many that the government doesn’t care about the sport, vis-à-vis other countries with similar economies.

This year is an Olympic Games year and the nation’s athletes, having established themselves as superpowers in past editions, will be expected to give their best in Japan this summer.

But how can they if they have not been able to prepare themselves adequately at home, even while the rivals have long been granted permission to prepare and compete at a high level, all in preparation for Japan?

Already, the Jamaica Athletics Administrative Association has withdrawn from the World Relays in Poland slated for next month. The governing body has cited technical and logistical issues as the cause, but readiness could also have been a factor.

Only recently the country’s cricketers were forced to compete in a regional tournament, woefully underprepared, due to their inability to properly prepare because of the lockdown imposed by the government. They were duly dismantled by the opposition, who never faced such restrictions in their home countries.

The Reggae Boyz, too, suffered a similar failure when they engaged in a friendly international against the U.S. in Austria last month with nine players in a squad who had not played competitively in over a year. Pure madness.

And remember the Reggae Boyz will be engaged in the CONCACAF Gold Cup in July and they will begin their campaign for qualification to next year’s FIFA Qatar World Cup Finals in September. The local Premier League is yet to get clearance from the government and for every day that passes, the Reggae Boyz are falling further behind.

By dint of the lockdown in Jamaica for such a long time, they already have their work cut out.

Will the track and field athletes and the footballers be able to recover in time for the Olympics and the Gold Cup and World Cup qualifiers? Only time will tell.