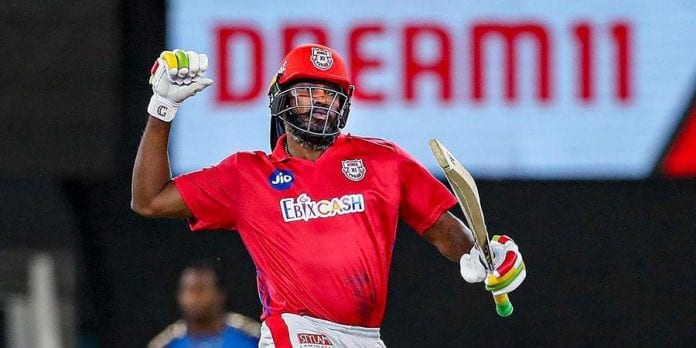 With scores tied on 176 after Kings XI failed to get the nine runs required from the final over for outright victory, both teams then found themselves level on five runs at the end of the first super-over, with another West Indies star, Nicholas Pooran, dismissed off the second ball for Kings XI.

In the second super-over, Pollard blasted the third ball from Barbados-born England all-rounder Chris Jordan for four but managed just two runs from the next three deliveries, as Mumbai posted 11 runs.

Gayle, in only his second appearance of the season, then gave Kings XI the ideal start when he cleared the ropes at long on the first ball of the over from New Zealand left-arm seamer Trent Boult.

A single off the next delivery put Mayank Agarwal on strike and he finished the game with consecutive boundaries.

Pollard had earlier belted a 12-ball unbeaten 34 as Mumbai, choosing to bat first at the Dubai International Stadium, tallied 176 for six off their 20 overs.

South African opener Quinton de Kock top-scored with 53 off 43 deliveries in a 58-run, fourth wicket stand with Krunal Pandya (34) to pull the innings around from 38 for three in the sixth over.

And with Mumbai slumping at 119 for six in the 17th over, Pollard arrived at number seven to strike a four and four sixes and dominate a 57-run unbroken seventh-wicket stand with Nathan Coulter-Nile (24 not out), which saw the reigning champions to their eventual total.

In reply, captain KL Rahul smashed 77 from 51 deliveries at the top of the order, adding 42 for the second wicket with Gayle who made 24 from 21 balls with a four and two sixes, before holing out to long-on off leg-spinner Rahul Chahar in the 10th over.

Rahul, who punched seven fours and three sixes, put on another 33 for the next wicket with the left-handed Pooran who also made 24 with two fours and sixes off just 12 balls.

Jordan had the chance to win it for Kings XI in the final over but was run out off the last ball with two needed for victory.

In another super-over finish in Abu Dhabi, West Indies all-rounder Andre Russell endured another hugely disappointing outing but his Kolkata Knight Riders got the better of Sunrisers Hyderabad.

Sent in, KKR raised 163 for five off their 20 overs with Russell managing only nine to extend his poor run with the bat that has seen him scrape 92 runs from eight outings.

Russell then conceded 29 runs from two overs, including sending down a last over which cost 17 runs and allowed Sunrisers to level the scores.