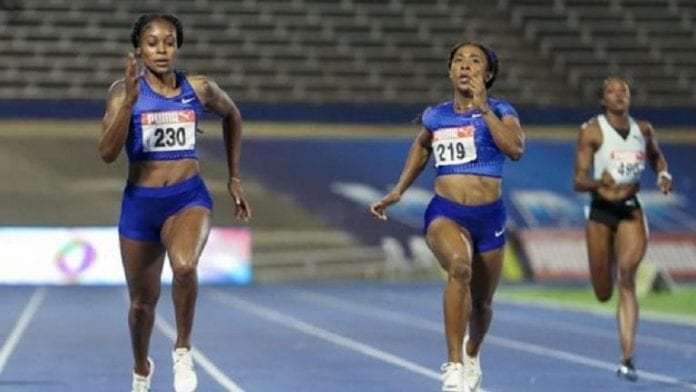 If that were the entrée, then today’s main course ought to be most delectable.

In the quarter-final heats of the women’s 100 metres in late evening, Fraser-Pryce, the fastest woman alive with an eye-catching 10.63-second clocking at the same venue recently, was in cruise-control mode as she sped to an easy victory in the first heat to in 10.97 seconds (1.1 mps) in front of Shashalee Forbes (11.13secs) and Remona Burchell (11.14secs).

Then as if in a direct response to her main challenger, Thompson-Herah appeared even more convincing with a 10.96 seconds (1.0 mps) effortless win in the very next heat. She beat MVP teammates Natalliah Whyte (11.14secs) and Shockoria Wallace (11.22secs) to set the stage for a much-anticipated clash later today.

Though clearly the two most impressive offerings on the day, the depth in quality of the Jamaican women’s sprinting came to the fore in heat three when Shericka Jackson, known more for her exploits in the longer sprint races (200m and 400m), clocked the fastest time with a personal best 10.91 seconds (0.4 mps).

The MVP athlete ran all the way through the tape to beat teammate Natasha Morrison and Shian Hyde in 11.06secs and 11.50secs, respectively.

Then as if in a prelude to the future of Jamaica’s sprinting, Briana Williams won heat four in11.00secs (0.5 mps) ahead of Kemba Nelson (11.05secs) and Kevona Davis (11.19secs) to set up dates with the more senior stars later today.

However, before a champion is declared in the final set to start at 7:55 pm (Jamaica time), the 16 qualifiers will have to pay attention to a little matter of the semi-finals are slated to run off at 6:25 pm (Jamaica time).

This has been the first National Senior Championships to select a team for the Olympic Games since the retirement of sprint great Usain Bolt in 2017 and with his saying goodbye, the allure on the men’s side of Jamaica’s sprinting has faded.

Nonetheless, former World Championships 100m gold medallist Yohan Blake appeared to be in the best shape he has looked in a long while as he eased to a season’s best 10.03 seconds (1.1 mps) to cop heat two ahead of Oshane Bailey in 10.26secs and Jelani Walker (10.31secs).

Devonte Burnett also did well in clocking 10.05secs (1.0 mps) to win heat three. It should be noted that Burnett and Blake are the only two Jamaicans who have met the Olympic qualifying standard (10.05secs) thus far.

The track was very fast yesterday and those of the outside looking in will be hoping for similar condition today in order to get themselves beyond the 10.05secs standard if they are to punch tickets to Japan next month.

Julian Forte and Oblique Seville were timed at 10.08secs (0.9 mps) in heat four, while in heat one Tyquendo Tracey and Nigel Ellis were also timed at 10.13secs (1.0 mps).

Earlier yesterday, Jamaica’s top 400m hurdler Leonardo Ledgister threw in a clinker (52.54secs) to finish down the track in sixth place in his heat and risk the ignominy of missing out on the plane to Japan.

The Texas A&M athlete who is the sole Jamaican to have achieved the Olympic standard of 48.90secs with his 48.79secs, will now sit and wait patiently to find out if more than three of his compatriots go faster than the standard in today’s final.

There were no semi-finals in the women’s category due to insufficient entries and the race will run as a 100m final today.

For the record the men’s javelin was also decided with Elvis Graham winning with a throw of 69.99m, a far cry from the Olympic Games qualifying standard of 85m.

Obviously, no one managed to get close enough to the Olympic standard of 13:13.50 minutes.

Today’s schedule starts at 5:00 pm (Jamaica time) with the men’s triple jump final, the women’s discus final and long jump final as the field events on the programme, while on the track, the women’s 400m heats will be followed by the men’s equivalent, then the men’s 800m semi-finals, the men’s and women’s 1,500m.