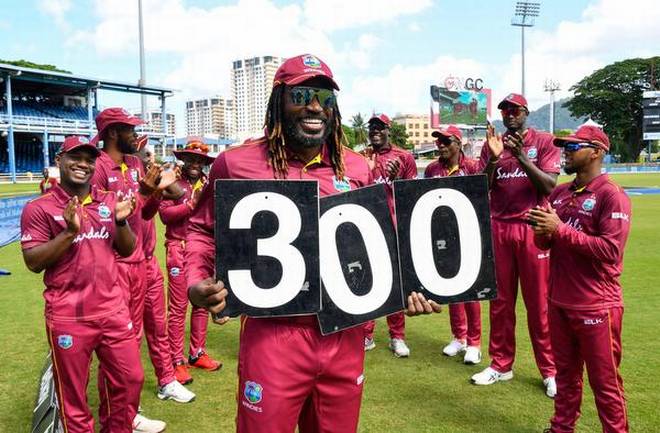 PORT OF SPAIN, Trinidad, CMC – Veteran opener Chris Gayle broke Brian Lara’s record for the most runs by a West Indies batsman in One-Day Internationals but his failure typified the Caribbean side’s brittle batting and overshadowed the achievement, as the hosts crashed to a 59-run defeat under Duckworth-Lewis-Stern in the second ODI here Sunday.

Chasing a revised target of 270 off 46 overs following a rain break 13 overs into their run chase at Queen’s Park Oval, West Indies were toppled for 210 with four overs remaining, to fall behind 1-0 in the three-match series.

Opener Evin Lewis, playing in front of his home crowd, top-scored with 65 while fellow countryman Nicholas Pooran chimed in with 42 but West Indies lost wickets at key stages to watch their chase come apart at the seams.

In fact, they appeared well en route to victory at 148 for three in the 28th over but collapsed and lost their last seven wickets for 62 runs in quick time.

India captain Virat Kohli had earlier struck his 42nd One-Day International hundred to become his country’s second-highest run-scorer in ODIs as the visitors reached 279 for seven off their 50 overs, after choosing to bat first.

The right-hander’s polished 120, which also saw him surpass Pakistani Javed Miandad for the highest ODI aggregate against West Indies, left him only behind legend Sachin Tendulkar in India’s all-time ODI scoring charts.

Seamer Carlos Brathwaite was the best bowler with three for 53 from his 10 overs.

West Indies struck as early as the third ball of the morning when left-arm pacer Sheldon Cottrell got one to straighten and trap Shikhar Dhawan lbw for two, courtesy of DRS.

Faced with a challenging but hardly daunting target, West Indies were handed a decent start of 45 off 57 deliveries for the first wicket by Lewis and Gayle.

Not for the first time, Gayle struggled with momentum but passed Lara’s mark of 10 405 runs when he took a single to third man at the start of the ninth over.

Unsurprisingly, however, he perished in the following over after facing 24 balls for his 11, lbw to a full-length delivery from Kumar, with the resulting review more out of desperation than prudence.

Shai Hope then played on to left-arm seamer Khaleel Ahmed in the 13th over for five as the Windies reached 56 for two at the rain break.

With the target revised, Lewis set about building the foundation for a possible win, facing 80 balls and striking eight fours and a six as he anchored two key partnerships to tilt the balance in the home side’s favour. First, he put on 40 or the third wicket with Shimron Hetmyer (18) before adding a further 56 for the fourth with Pooran.

He lost Hetmyer at the end of the 18th over, caught at cover off Kuldeep miscuing a pull before he then departed in the 28th over, hauled in at cover by Kohli also off Kuldeep.

Even then, West Indies still looked safe bets to prevail as Pooran struck four fours and a six off 52 balls in a 31-run, fifth-wicket stand with Chase (18).

But with the partnership threatening, Kumar removed both in the 35th over in a wretched period that saw West Indies lose four wickets for three runs in the space of 14 balls, as India regained control of the contest.