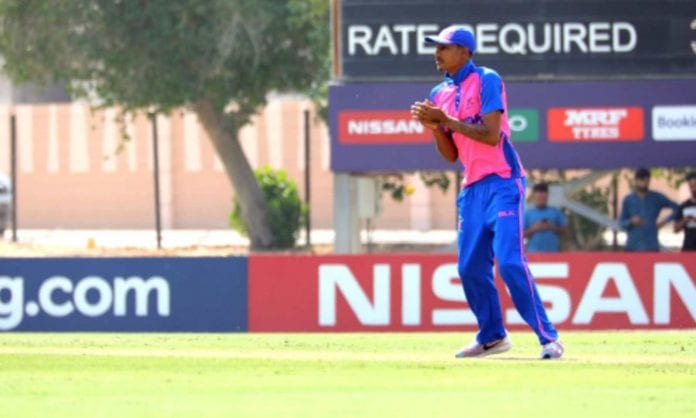 DUBAI, United Arab Emirates, CMC – Bermudian Deunte Darrell will miss Bermuda’s next ICC T20 World Cup Qualifier match against Scotland on Thursday after he was handed one suspension point for breaching Level 2 of the ICC Code of Conduct, officials announced.

The 27-year-old batsman was found to have breached Article 2.21 of the ICC Code of Conduct for Players and Player Support Personnel, which relates to “conduct that brings the game into disrepute”, following his reckless behaviour during the Group A match against Namibia on Wednesday.

Bermuda, yet to earn a point after four successive defeats, lost the game by six wickets.

In addition to the suspension point, three demerit points have been added to Darrell’s record.

The incident happened in the eighth over of Bermuda’s innings as Darrell left the field after being adjudged lbw. He threw one of his batting gloves in the direction of the opposing team, hurled his bat at the advertising board and then threw his second glove in the direction of his own team in a very aggressive and intimidating manner.

Bermuda, on the verge of elimination, need to beat Scotland and leaders the Netherlands on Saturday and hope other results go their way if they are to remain in the running for one of six places for qualifiers at next year’s T20 World Cup in Australia.