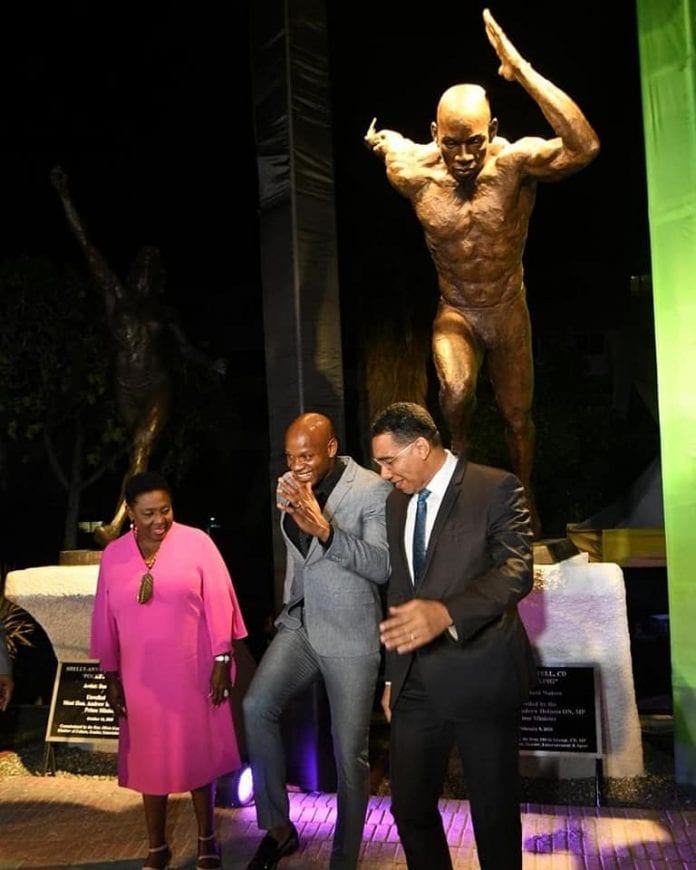 KINGSTON, Jamaica – In early 2017 as Jamaica prepared to celebrate 55 years of independence the Government announced a list of ‘Jamaica 55’ Legacy Projects, which included the commission of statues for Usain Bolt, Shelly-Ann Fraser-Pryce, Veronica Campbell-Brown and Asafa Powell.

At the time Minister of Sports Olivia Grange had earmarked Bolt’s statue to be erected by the end of September 2017; Fraser-Pryce by the end of December 2017, and Campbell-Brown and Powell in 2018.

That none of the statues was erected on time was not a surprise, nor is it the bone of my contention here.

From the get-go, I thought parts of the announcement were merely for political expediency.

After all, all four track athletes at the time were still actively competing and the mere thought of erecting statues in their image at the time should have been a huge non-starter for any well-thinking individual.

But in the end political expediency, as it often does, triumphed over reasoning and logics.

And make no mistake about it, I am not for one moment trivializing the magnitude of the contribution of some of our athletes and the need to recognize them while they are alive and able to accept and appreciate the love of the nation.

But there are some tried and proven basics principles involved in paying the ultimate homage to athletes, and sadly these were thrown out the window by the Jamaican Government about the four statues recently erected at Statue Park at the National Stadium in recent time.

The fact that every athlete will not have a statue of his/her image erected means that such an honor is reserved for the truly great among us, who would have met most of the agreed criteria set out.

For good reason, elite athletes are normally knighted or inducted into Hall of Fames well after their retirement when they can no longer risk injuring their reputation in the sport, including running afoul of the authorities, especially when track and field athletes have to navigate the minefield that is anti-doping.

God forbid, but how embarrassing would it be for the Government and the nation as a whole, if one of the three athletes still competing were to fail a drugs test now, and not for any minor offence but something significant?

There are various other ways the Government could have acknowledged our outstanding athletes without erecting statues at Statue Park. They could have set up museums and erected busts of these great athletes and reserve the statues for the true greats among us for when the time is right.

Somehow the proliferation of the erection of statues over the past few years seems to have watered down the effect of what should have been a prestigious occasion.

And that leads to the question of who deserves to have a statue of his image erected.

Many have questioned the inclusion of Asafa Powell, the much-loved Jamaican sprinter.

No one in his right mind has questioned the right for Bolt to have a statue erected. Nor has anyone questioned Shelly-Ann or Veronica Campbell-Brown. Their records speak volumes and are there for all to see and admire.

They succeed at the highest levels with some degree of consistency at the Olympics and World Championships, and in the case of Campbell-Brown, at every level from junior to senior.

They are not just Jamaican greats, but track and field greats.

Sadly, the same can’t be said of Powell, as great he has been for Jamaica. It can be successfully argued that running nearly 100 sub-10-second races doesn’t guarantee a statue.

What about Deon Hemmings, the first Jamaica woman to win Olympic gold? How about Melaine Walker, Olympics and World Championships gold medalist?

What about Omar McLeod, the 110m hurdles Olympics and World Championships gold medalist?

It is argued that Asafa started the ball rolling by inspiring a host of sprinters at the turn of the century. But have we forgotten Lennox Miller and Dennis Johnson? Are they deserving of statues?

We had better be careful and stop this madness. There are many proven templates around to help select the best of the best. No need to reinvent the wheel but just accept.