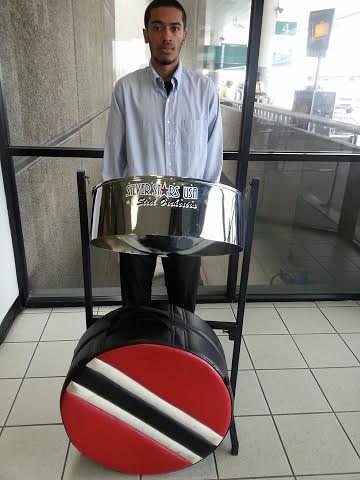 Twenty-four-year-old Janathon Baboolal who was born in the US to Trinidad and Tobago parents and resides in Plantation, Florida is among the few talented musicians that plays in that country’s unique genre of steel-pan music. He specializes as a pan soloist.

Jonathan is currently attending Broward College pursuing an Associate of Arts degree in Business Administration and plan to later complete the Bachelors of Science degree in Supervision & Management. In the mean-time he enjoys himself and spreads Trinbagonian culture in the USA as the captain of the Silver Stars USA Steel Orchestra, the former Panorama champions for two consecutive years.

He became interested in music from the early age of 6, when he was introduced to the piano in New York City but “that was an uphill talent for me.” He switched to playing pan at 12 years old, and although it took him a while, he eventually settled and built the confidence to play solo. “Once those first time jitters were gone, I knew playing pan is what I wanted to do.”

For him, being able to travel to meet new people is his memorable for him, and are moments he experiences every time he travel to performing in the steel-pan orchestra.

He has been featured in Trinidad newspapers for his musical talent articles, which he considers “a very proud achievement.”

He attributes his musical talent to his mother, who introduced him to the piano at age-6, guitar lessons, and after the family moved to Florida in November 2002, to steel-pan lessons.

Jonathan never regretted making music a major part of his life, and he advises youth in the Diaspora if they have a passion for music “a major part of my life. Music is a universal language in which everyone can communicate. To deny someone of that would be a tragedy.”

He is very grateful for his Trinidadian heritage which “helped me embrace the steel pan even more. Steel pan is a very important part of Trinidad carnival and where it got started. To see how far the music has come and how much it is appreciated internationally today makes him extra proud of his heritage.

“Music is my life. Trinidad is a major hub for music of all kinds and artists of all different backgrounds. I will always be proud to be a Trinidadian & Tobagonian-American.”