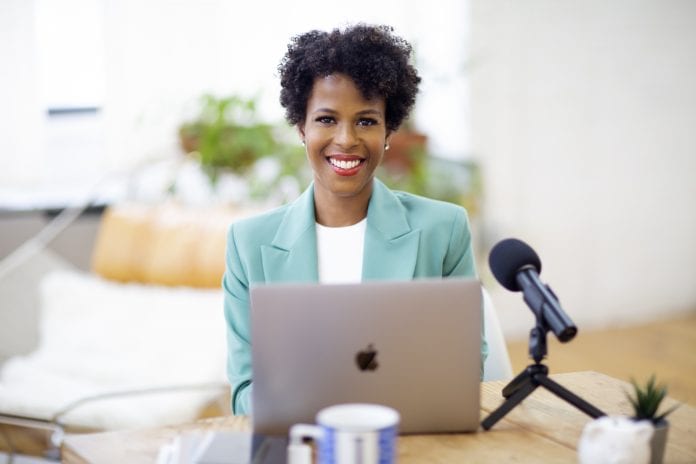 With over two million podcast downloads, a monthly audience of over 150 thousand, a backlog of over 200 episodes, and new episodes released weekly, there’s no sign of Souffrant slowing down anytime soon.

Her podcast tackles every topic imaginable to steer her audience towards financial independence. In her latest CNBC appearance, she describes her platform as, “dedicated to helping others achieve financial freedom. It was born out of my own experience saving and investing $169,000 in two years and making the leap from my corporate job to being my own boss.”

Souffrant says, however, she wouldn’t be where she is today without the guidance and provision from her Jamaican mother and grandmother. Her talent as a master saver and affinity for learning, and now teaching, can all be traced back to these two Jamaican women.

At just age 20, her mother gave birth to her in Jamaica, and by the time Jamila Souffrant was nine months old, her mother made the difficult decision that many Jamaican mothers still make today—she left Souffrant in the caring hands of her grandmother while she migrated to Brooklyn, New York. And, also like many Jamaicans living overseas, Souffrant’s mother quickly started working multiple jobs, sending half her paycheck back home.

When her mother was finally able to bring Souffrant to live with her in New York, things began to settle for the mother-daughter duo. Her mother would go on to first earn an associate’s degree, then a Bachelor of Social Work, and later a master’s degree in the same field. “I didn’t want to work a minimum wage job for the rest of my life,” her mom recalls on an episode of Journey To Launch.

Souffrant says it’s her mother and grandmother who were responsible for instilling in her the basics of financial management.

Both women regularly saved their money, urging Souffrant to do likewise, despite neither having any background in finance. After all, it was customary in Jamaica to “save for a rainy day,” as her mother puts it.

Now in her 30s, Souffrant and her husband have accumulated more savings than most Americans do in a lifetime, and live debt-free besides their mortgage. She is also a mother of three young children and lives in Brooklyn.

A System That Works

To get there, Souffrant made radical changes in spending and saving, using the FIRE (Financially Independent Retire Early) system. The FIRE movement is all about saving and investing intelligently and aggressively—at least 50 percent of your income. The aim is in the name: to become financially independent, that is, to have enough wealth as early as possible, so you don’t have to work to afford necessities.

Souffrant can point to the catalyst that drew her to adopting the system.

At 31, she had a good job that paid well. But, the commute was hell—two hours from home to work, and two hours back, on a good day. One day, while pregnant with her first child, she remembers being stuck in traffic for over four hours. It was then that she decided, enough was enough. Not only did she not want to be stuck in a car for hours, but she realized she also didn’t want to work in an office, or for a boss, for that matter. Instead, she wanted to have more time for her family.

She came up with a financial plan and also started Journey To Launch, which began as a blog to record her journey to financial independence. “If I put this out to the world—to the two people who were reading my blog at the time—it should keep me accountable,” she revealed on the pilot episode of the podcast.

Becoming a Resource for Others

What surprised Souffrant was how many people were connecting with her story and wanted to know how to make a similar change in their own lives. “I wanted to be a resource. I wanted to provide tips and tools,” she shares. Today, Jamila Souffrant is considered a financial thought leader in the personal finance field and is the resident financial expert on a weekly segment on News12, the most-watched local TV news station in NYC.

She has also been featured in Essence, Refinery 29, Money Magazine, CBS, Business Insider, and more. The podcast was also named one of “27 Podcasts You Need To Start Listening To” by BuzzFeed.

Needless to say, Jamila Souffrant has indeed accomplished her mission. She’s living her financial dream while helping others do the same—as a resource for many people around the world. She’s also a testament to the possibilities for Caribbean immigrants to the U.S., and how our strong work ethics, plus cultural belief systems, can lead us to a level of financial success our forefathers could never dream of.